Global warming could deplete the oceans’ oxygen – with severe consequences 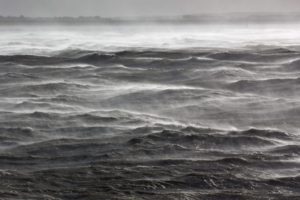 In the long list of troubling climate change scenarios, there’s one that gets relatively little attention, but definitely has enormous potential consequences.

The oceans are getting warmer — they are, after all, where 90 percent of global warming actually ends up. And when they warm up they expand, because that’s what warm water does. This raises our sea levels, but it also has another effect — it reduces the amount of oxygen dissolved in the water. That’s simply physics: Warmer water contains less oxygen.

But it’s worse: If surface water is warmer, it doesn’t mix down as much into the ocean depths any longer. It’s less dense, and so less capable of doing that. That means that oxygen that enters the ocean in its upper layers — either through exchange with the atmosphere, or because it is generated by tiny photosynthesizing microorganisms, called phytoplankton, that hang out up there — won’t mix down into the deep as often.

“What’s happening is, there’s a physical mechanism that impedes the delivery of surface waters into the interior,” said Matthew Long, an oceanographer with the National Center for Atmospheric Research who is lead author of a troubling new study on what scientists call the “deoxygenation” of the oceans. The work appeared in Global Biogeochemical Cycles, co-authored with Curtis Deutsch of the University of Washington and Taka Ito of the Georgia Institute of Technology.

The problem is that marine life needs oxygen. If there’s less of it, that could expand the number of areas sometimes called “oxygen minimum zones” where plants, fish, and other organisms would struggle to survive.

Now, in the new study, Long and his colleagues have found that some parts of the ocean are already likely showing an oxygen deficiency, due to the effects of global warming. And by around the year 2030, their model suggests, the human role in driving widespread ocean oxygen loss will be even more apparent if greenhouse gas emissions continue unchecked.

And that could have major consequences for marine organisms. “Metabolic rate processes increase as a function of temperature, so as warming increases, organisms actually require more oxygen to function, and as oxygen declines, basically what it will cause is a contraction of viable habitat for a host of organisms,” Long said.

The problem won’t be as bad at the ocean surface, where there is oxygen exchange with the atmosphere and a major oxygen source in the form of marine phytoplankton, which give off oxygen through the process of photosynthesis. Rather, it will most severely impact deeper waters of what the study calls the “ocean interior,” which will no longer receive as much of an exchange of oxygen-rich waters with the surface.

Long’s isn’t the first report to warn of this problem. “A major concern is that these so-called oxygen minimum zones (OMZs) will expand in the future as the upper ocean warms and becomes more stratified,” wrote the Scripps Institution of Oceanography’s Ralph Keeling and two colleagues in 2010.

But what’s new about the current study is the use of a sophisticated climate change modeling process to try to determine precisely when a less oxygen-rich ocean will manifest itself in a way that can be attributed to human-induced climate change. This is difficult to determine because there is a large amount of natural variability in how much oxygen waters around the world contain, due to factors such as ever-shifting interactions between the oceans and atmosphere, and the way ocean life responds to these changes.

The new study thus aims to solve this “signal-to-noise problem,” using a high-powered climate model that couples together both the atmosphere and ocean. The authors ran multiple simulations, starting in the year 1920 and running through the year 2100 — a key assumption being that global emissions remain at a high level throughout the century. (In other words, actions taken today could still take us off this dire pathway).

This approach allowed for a statistical detection of when ocean oxygen trends move decisively downward due to climate change. And here were the results, courtesy of the National Center for Atmospheric Research: 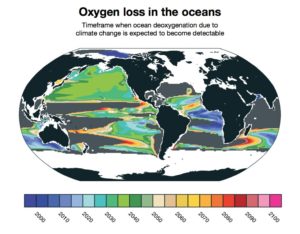 You will notice that many of the changes occur quite soon in this modeling exercise — within 20 to 30 years. High levels of greenhouse gas emissions, the study reports, produce a “sharp acceleration of oceanic deoxygenation in the first half of the 21st century.” Indeed, the study finds, in some regions the trend may already be happening and could theoretically be detectable, if measuring capabilities were good enough and records went far enough back in time to capture a trend.

However, it is also worth noting that some regions don’t show a trend even out to the year 2100. So the impact would be highly variable over the world.

“There is a lot of variability in ocean oxygen, and it is a detection problem,” Long said, “but this inexorable force of human-induced warming will clearly result in widespread ocean deoxygenation in the future.”

What’s most novel about the research is not the general concept but the sense of its timing, said Donald Boesch, president of the University of Maryland Center for Environmental Science. “The high likelihood of deoxygenation in the deep sea has long been predicted,” Boesch said by email. The new study “is not really a new finding, but a useful analysis of the detectability of the changes.”

“This latest study adds one more item to the list of insults we are inflicting on the oceans through our continued burning of fossil fuels,” said Penn State University climate scientist Michael Mann. “Ocean life and marine ecosystems must now simultaneously contend with the triple threat of warming waters, increased acidity, and now—we’re learning—lower oxygen levels. Any one of these challenges alone would be daunting.”

“Just a week after learning that 93% of the Great Barrier Reef has experienced bleaching in response to the unprecedented current warmth of the oceans, we have yet another reason to be gravely concerned about the health of our oceans, and yet another reason to prioritize the rapid decarbonization of our economy,” Mann added.

It doesn’t help that other research suggests that the world’s oceans have gone through oxygen depletion events before, in the distant past — one place where scientists always look to determine where we might be heading. Such past events were “often associated with evidence of warmer climate conditions, rises in sea level, and occasionally with mass extinctions,” noted a 2010 review study on ocean deoxygenation under climate warming. “Although their cause remains uncertain, their occurrence underscores the potential vulnerability of the oceanic O2 supply in warmer climates.”

Long, for his part, also highlights that deoxygenation will be operating in combination with other trends like overall warming and acidification to imperil the oceans.

“These things are pushing the marine system into unknown places,” he said.