It May Soon Be Too Late to Save the Seas 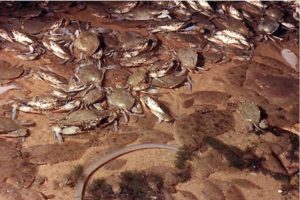 By the 2030s, declining oxygen levels will likely be evident in many of the world’s oceans. (NOAA VIA NATIONAL SCIENCE FOUNDATION)

What happens if marine life in the oceans can’t pull in enough oxygen from the oceans to live? We may be about to find out.

A startling new study led by the National Center for Atmospheric Research (the federal research arm of the National Science Foundation) published Wednesday found a disturbing trend – a warming planet could overwhelm natural variability and start to significantly affect oxygen levels in the oceans in just 10-15 years.

The study confirmed what scientists have long observed – that climate change is causing a drop in the amount of oxygen dissolved in oceans in some parts of the world. But the study’s central conclusion is what is so alarming – the effects of this drop in the amount of oxygen all marine life require will start to become evident in just 15 years or so. At some point, the drop in the ocean’s oxygen levels will leave marine life struggling to breathe.

Climate scientists have predicted for some time that the planet’s rapidly warming climate (2014 and 2015 were the hottest years in civilized history and 2016 may eclipse the record as well) would start to affect oxygen levels in the oceans.

But what they haven’t been able to show, until now, is just how noticeable the drop in oxygen levels actually was – and how to separate what was caused by natural variability (like the el Nino cycle) and what was caused by climate change.

“Loss of oxygen in the oceans is one of the serious side effects of a warming atmosphere, and a major threat to marine life,” said Matthew Long, who is the lead author of the study. “Since oxygen concentrations in the ocean naturally vary depending on variations in winds and temperature at the surface, it’s been challenging to attribute any de-oxygenation to climate change. This new study tells us when we can expect the effect from climate change to overwhelm the natural variability.”

The crossover – the point at which climate change starts to overwhelm the earth’s normal cycles and systems (natural variability) – will start to occur in just a decade or so, the study concluded. From that point forward, marine life will find it progressively more difficult to simply exist as the planet continues to warm.

The basics of the problem are this. The entirety of our oceans (from the waters at the ocean floor to the shallows) gets its oxygen supply from the surface. That oxygen is dissolved either from the atmosphere or from phytoplankton (which releases oxygen into the water through photosynthesis, a process nearly every child in America understands by the time they leave elementary school).

But as the planet’s surface warms – and it has already warmed, on average, by about 1.7 degrees Fahrenheit since the start of the industrial revolution – the ocean’s surface absorbs less oxygen.

What’s even worse is that, as the ocean’s surface heats up, the absorbed oxygen begins to struggle to travel deeper into the ocean. A simple chemistry experiment shows why: as water heats up, it expands and becomes lighter than the water below and less likely to sink. So less absorbed oxygen travels into the depths as a result.

While it’s true that natural cycles of warming and cooling change the oxygen concentrations at the surface of the oceans, that isn’t the case at the deeper levels of the ocean where a great deal of marine life lives. There, changes occurring now due to global warming can literally alter the web of life for decades.

To sort through how much global warming is affecting depleted oxygen levels, the research team – which also included Curtis Deutsch at the University of Washington and Taka Ito of Georgia Tech – relied on NCAR’s atmospheric supercomputer, which has built an earth system model.

“This study shows how far comprehensive earth system models have come in the effort to quantify, along with relatively sparse observations, large-scale changes in oxygen in the oceans due to both natural variability and climate change,” said Eric Itsweire, who is a program director in NSF’s ocean sciences division.

I don’t know how else to put it. This is serious. If the National Security Agency’s massive supercomputing network predicted ISIS was about to attack the United States, we’d mobilize. But what happens when our nation’s only atmospheric supercomputer tells us the oceans’ marine life is in serious jeopardy?

This isn’t some incremental threat way off in the distance. We’re talking about an existential threat to marine life that is emerging literally right now.

We need to pay attention – right now, not 50 years from now – to what is happening on the planet we have conquered and are supposed to be protecting. Marine life can’t tell us why depleted oxygen levels threaten them. Only we, the human species, have the ability to understand the threat – and do something about it.

This is more than just a matter of trawlers losing the ability to fish for crabs, or cruise lines giving up the possibility to convince tourists to pay to go whale-watching. We’re talking about, quite possibly, the beginning of the collapse of the web of life in our oceans.

The new study – which was published in the American Geophysical Union journal “Global Biogeochemical Cycles”, funded by NSF and led by NCAR scientists – should be a stark, clear warning of what the world is facing. But one of our two national parties in the United States has chosen to simply pretend that none of it is real.

In fact, just last night, the presumptive nominee for the Republican Party, Donald Trump, literally laughed out loud about the saliency of the global warming threat we face, right now, during his press conference celebrating his massive five-state primary win.

Trump, who now stands a 50-50 chance of becoming the next American president, literally dismissed global warming out of hand as a joke and not something to be either understood or addressed. But the ocean’s marine life will, at some point in the not-too-distant future, begin to disagree with him. Silently, struggling to breathe.