Based on historic weather patterns, the Midwestern United States can expect the drought of the century around 2025, according to Elwynn Taylor, a climatologist for Iowa State University Extension, Ames. 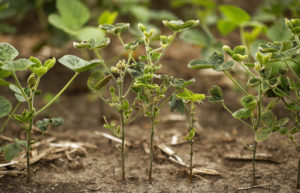 The Midwest might be ripe for a major drought in 2025, according to a climatologist speaking Wednesday at the annual Upper Mississippi River Conference in Moline. These are soybean plants stressed by dry conditions in southern Iowa this year.

While the Earth’s climate is changing, some weather cycles recorded by actual data or discerned by studying tree rings is remarkably consistent, Taylor said.

One consistency is the Gleissberg cycle, suggested by scientist Wolfgang Gleissberg, in which changes in solar activity every 89 years corresponds with a major drought in the Midwest, Taylor said.

Taylor spoke in a session that also included a talk about the “Dead Zone” in the Gulf of Mexico — where we stand and how we’re doing. Rebecca Smith, of The Nature Conservancy, a worldwide conservation organization, made these points:

• The “Dead Zone,” or area of low oxygen, grew to 8,776 square miles this year, the largest since monitoring began 32 years ago

The zone is caused by algal blooms that consume oxygen. The blooms are fueled by nutrients, primarily nitrate and phosphorus from agricultural runoff in the Mississippi River.

• The most effective way to reduce the amount of nutrients is to focus on the rivers that contain the most — the Wabash in Indiana, the Illinois in Illinois and the Des Moines and Iowa in Iowa. These basins are “musts,” she said.

• Private entities are helping to push change and innovation, and Smith sees great potential in this. One entity is The Fertilizer Institute, based in Washington, D.C., that has adopted a “4R” program for reducing fertilizer runoff.

Those principles are to apply fertilizer at the right location, right time, in the right way and of the right type. “Farmers will listen to their fertilizer man,” Smith said.

The other entity is the totality of companies selling food products that have become interested in sustainable corn because their millennial customers are professing an interest in sustainability, Smith said. These include General Mills, Walmart, Coca-Cola and Pepsi, she said.

The river conference continues through today at the TaxSlayer Center, formerly the iWireless Center. Topics this year focus on climate change and nutrient reduction.