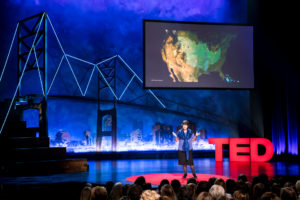 Dr. Nancy Rabalais, Professor and Shell Endowed Chair in Oceanography and Coastal Sciences, presented a TED talk at TEDWomen in New Orleans on November 1, 2017. The theme of the conference was “Bridges,” and Dr. Rabalais spoke of bridging science to policy that improves environmental policies for improved water quality.

In particular, she spoke of the low oxygen area in the Gulf of Mexico, commonly called the ‘Dead Zone.’ She noted the increase in size and worsening of the ‘Dead Zone’ in parallel with increasing nitrogen loads to the Gulf of Mexico from the Mississippi River watershed. As she said, “no oxygen in the bottom waters, no catches of shrimp.”

The sources of nitrogen are primarily from agricultural practices and predominantly from fertilizers applied to corn-soybean crop rotation. There are several agricultural best management practices that can be put in place. Many more farmers are accepting the philosophy and practices of sustainable agriculture with long-rooted, perennial crops such as intermediate wheat grass that conserves soil and prevents nitrogen movement off the fields with a crop that is just as economically profitable as corn.

Dr. Rabalais’ work has focused on the dynamics of the low oxygen areas, and as promised, the translation of science to information that can be used by the public, agencies, and Congressional representatives to make better decisions concerning our water resources. The complete, edited version of Dr. Rabalais’ TED talk will come within the next year on TED.com.