What does it look like to dive in the Gulf dead zone? This diver took video

Researchers have measured the dead zone growing along the Louisiana and Texas coasts during the summer months since 1985. This year, one of those researchers carried a GoPro with him as he dove below the surface in the heart of the oxygen-deprived waters.

In mid-August, Cameron Thrash, an assistant professor for Louisiana State University’s Department of Biological Sciences, dove 60 feet down at the site of a measuring station about 30 miles south of Cocodrie. Video from a GoPro he was wearing shows the vacant waters where bacteria has depleted the water of oxygen. 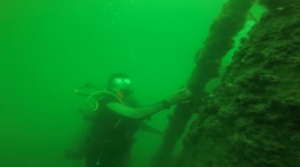 As Thrash moved deeper, it became harder to see the other researchers. “It gets really murky and then pitch black,” he said. “As you get to minute 10, it becomes really hard to see anybody.” Thrash’s journey into the depths of the dead zone begins around the 7:00 mark.

The dead zone forms when the Mississippi River flushes fresh water laden with nutrients, such as nitrogen and phosphorus, into the Gulf. The nutrient pollution fuels massive algal blooms, which die off and sink to the sea floor. The algae is consumed by bacteria, which depletes the water of oxygen.

With hypoxia, or low oxygen in the water, fish avoid the area. Sea life that cannot escape dies. The dead zone that forms in the northern Gulf of Mexico is the second largest in the world. Researchers estimated that the hypoxia zone was 8,776 square miles this year, the largest it’s been since recording began in 1985.