Replacement of horses by machines since the 1940s allowed central U.S. farmers to change the crops they planted, which may have altered regional climate. 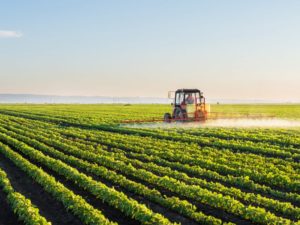 “Rain follows the plow,” or so the pioneers who started farms in the drylands of the American West were told.

The 19th-century notion that cultivation will always lead to a beneficial change in the climate turned out to be false. But researchers have previously found that climate does respond to what people do on the ground, like when monsoon patterns have been altered by deforestation.

Now a new study has investigated the climate effects of a century-long conversion in the United States, from farmers using animals to do almost all of the plowing and other heavy farmwork to using only machines. An increase in heavy rainfall events in the 20th century in the American Midwest appears to be closely tied to that switch from horsepower to mechanized agriculture, according to Taleena Sines of the International Centre for Theoretical Physics (ICTP) in Trieste, Italy, and Raymond Arritt of Iowa State University in Ames.

Arritt presented the findings Tuesday in a talk at the General Assembly of the European Geosciences Union in Vienna, Austria. Sines had done the research as a Ph.D. student at Iowa State, where Arritt was her advisor.

Prior studies had shown that periods of very heavy and extreme rainfall had become significantly more common in the central United States since the 1940s. In itself, this is not unexpected. More precipitation, in heavier downpours, is a known consequence of global warming, Arritt said, because warmer air can hold more moisture. However, he and Sines wondered whether anything other than rising temperatures might have contributed to the precipitation trend.

Since early in the past century, mechanization has transformed U.S. agriculture. In the process, the switch to machines has dramatically shifted the mix of crops being raised, Arritt said. Whereas horses dominated agriculture in the 1920s, by 1943 machines were doing as much work as animals. By 1960, using animal power was almost unheard of.

Fewer horses meant fewer oats. U.S. oat cultivation consequently sank from 19 million hectares in 1945 to just 1 million in 2010, as farmers took the opportunity to switch to more profitable crops. In the same period, the area devoted to soybeans grew from 5 million to 34 million hectares. This meant, Arritt noted, that vast areas were no longer light-colored in summer, as mature oats are, but a much darker green that absorbed more solar energy. In the same period, the area under irrigation greatly expanded.

To evaluate the effects of these crop and cultivation changes on the regional climate of the Midwest, Sines set loose on the problem an advanced set of computer tools: The widely used Weather Research and Forecasting Model helps the U.S. National Weather Service and others generate forecasts, and the Community Land Model calculates the effects that climate exerts on vegetation, and vice versa. In the data processed by these models, Sines used county-by-county crop statistics. These statistics included not just the changes from oats to soybeans but also the changes in acreages of corn, spring wheat, winter wheat, and sorghum that accompanied the rise of mechanization in the American heartland.

To investigate how land use changes might have altered Midwestern climate, she had the models project the climate for a region that stretched from Wisconsin west to Wyoming and south to Mississippi during the period from 1979 to 2010. First, she held the land use steady, as it was in the 1940s, and then she reran the models with the region’s 2010 cultivation pattern.

To further disentangle land cover effects from those caused by global warming, Arritt said, he would like to include simulations with greater spatial resolution, which would allow him to take convection into account. There is also more work to be done to separate the effect of changing crops from the effect of changed use of irrigation. Although Sines is no longer on the project, Arritt said that he plans to repeat the research with other computer models, to see whether the conclusions hold up.

“There have only been a few studies like this, with regional models, and none in North America,” said Diana Rechid of the Climate Service Center in Hamburg, Germany, who described the new study as “totally interesting.” Rechid studies land–atmosphere interactions and how land use patterns might contribute to mitigating or adapting to climate change. Because Sines’s work so far lacks “the ensemble approach [of] using many models,” it’s not yet clear whether other models would give different results.  However, she added, “this is already strong evidence that there is an effect.”