A new report shows toxins from suppliers to companies like Tyson Foods are pouring into waterways, causing marine life to leave or die. 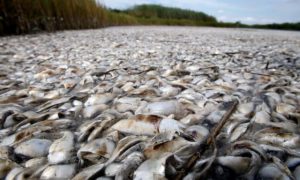 Toxins from manure and fertiliser pouring into waterways in and around the Gulf of Mexico are causing harmful algal blooms, leading to widespread ‘dead zones’. Photograph: Patrick Semansky/AP

The global meat industry, already implicated in driving global warming and deforestation, has now been blamed for fueling what is expected to be the worst “dead zone” on record in the Gulf of Mexico.

Toxins from manure and fertiliser pouring into waterways are exacerbating huge, harmful algal blooms that create oxygen-deprived stretches of the gulf, the Great Lakes and Chesapeake Bay, according to a new report by Mighty, an environmental group chaired by former congressman Henry Waxman.

It is expected that the National Oceanic and Atmospheric Administration (Noaa) will this week announce the largest ever recorded dead zone in the Gulf of Mexico. It is expected to be larger than the nearly 8,200 square-mile area that was forecast for July – an expanse of water roughly the size of New Jersey.

Nutrients flowing into streams, rivers and the ocean from agriculture and wastewater stimulate an overgrowth of algae, which then decomposes. This results in hypoxia, or lack of oxygen, in the water, causing marine life either to flee or to die.

Some creatures, such as shrimp, suffer stunted growth. Algal blooms themselves can cause problems, as in Florida last summer when several beaches were closedafter they became coated in foul-smelling green slime.

America’s vast appetite for meat is driving much of this harmful pollution, according to Mighty, which blamed a small number of businesses for practices that are “contaminating our water and destroying our landscape” in the heart of the country.

“This problem is worsening and worsening and regulation isn’t reducing the scope of this pollution,” said Lucia von Reusner, campaign director at Mighty. “These companies’ practices need to be far more sustainable. And a reduction in meat consumption is absolutely necessary to reduce the environmental burden.”

The Mighty report analyzed supply chains of agribusiness and pollution trends and found that a “highly industrialized and centralized factory farm system” was resulting in vast tracts of native grassland in the midwest being converted into soy and corn to feed livestock. Stripped soils can wash away in the rain, bringing fertilisers into waterways.

Arkansas-based Tyson Foods is identified by the report as a “dominant” influence in the pollution, due to its market strength in chicken, beef and pork. Tyson, which supplies the likes of McDonald’s and Walmart, slaughters 35m chickens and 125,000 head of cattle every week, requiring five million acres of corn a year for feed, according to the report.

This consumption resulted in Tyson generating 55m tons of manure last year, according to the Environmental Protection Agency (EPA), with 104m tons of pollutants dumped into waterways over the past decade. The Mighty research found that the highest levels of nitrate contamination correlate with clusters of facilities operated by Tyson and Smithfield, another meat supplier.

This pollution has also been linked to drinking water contamination. Last week, a report by Environmental Working Group found that in 2015 water systems serving seven million Americans in 48 states contained high levels of nitrates. Consuming nitrates has been linked to an increased risk of contracting certain cancers.

“Large parts of America are being plowed up for corn and soy to raise meat,” said von Reusner. “There is very little regulation so we can’t wait for that.”

“The corporate agriculture sector has shown it is responsive to consumer concerns about meat production so we hope that the largest meat companies will meet expectations on this.”

The report urges Tyson and other firms to use their clout in the supply chain to ensure that grain producers such as Cargill and Archer Daniels Midland employ practices that reduce pollution flowing into waterways. These practices include not leaving soil uncovered by crops and being more efficient with fertilizers so plants are not doused in too many chemicals. The US is an enormous consumer of meat, with the average American chewing through 211lbs in 2015. A study released earlier this year found that US beef consumption fell by nearly one fifth from 2005 to 2014, possibly due to concerns over health or the environment. A new increase is now expected. According to the US Department of Agriculture, beef and pork production is forecast to grow significantly over the next decade, driven by lower feed costs and healthy demand. By 2025, the average American is expected to eat 219lbs of meat a year. Just 3% of Americans follow a vegetarian or vegan diet.

This voracious appetite for meat has driven the loss of native forests and grasslands in the US and abroad, releasing heat-trapping gases through deforestation and agricultural practices. Agriculture produced 9% of US greenhouse gas emissions in 2015, according to the EPA.

A spokesman for Cargill said the company was an “industry leader” for sustainable practices, pointing to its efforts with environment groups to address air, water and soil quality in Illinois, Iowa and Nebraska.

“Protein consumption is growing globally and we are working to meet increased consumer demand with sustainably and responsibly produced foods and supply chains,” said the spokesman. “We are dedicated to protecting animal welfare, reducing environmental impact, increasing transparency and keeping workers and consumers safe.

“We also continue to improve livestock feed efficiency. Over the last 15 years we have seen an overall trend in reducing the volume of feed for each pound of beef produced.”

A Tyson spokeswoman said “we don’t agree with the group’s characterization of our company but share its interest in protecting the environment.” “It’s true the livestock and poultry industry is a major buyer of grain for feed, however, the report fails to note that a large percentage of corn raised in the US is used for biofuel and that a significant portion is used for human consumption,” she added.

“Tyson Foods is focused on continuous improvement. We are constantly looking to improve and lead the industry, so that we can deliver sustainable food to people every day at a scale that matters to the world.”

Archer Daniels Midland were also contacted for comment prior to publication.