GALVESTON – A mass die-off of coral and other sea animals discovered this week on a reef in the Flower Garden Banks National Marine Sanctuary stunned and saddened scientists who have viewed it as one of the healthiest coral reefs in the world. 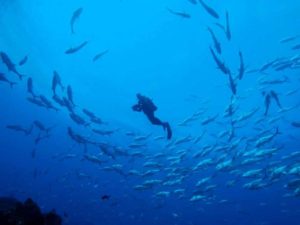 “I was sobbing,” said Emma Hickerson, one of the first scientists to see the destruction below the surface of the Gulf of Mexico.

Hickerson, research coordinator for Flower Garden Banks, said Saturday she made the observations a few days earlier during a dive to check a report by sports divers of hundreds of dead brittle stars, sea urchins, corals and sponges.

“We went there and confirmed it,” Hickerson said. “It was a rather shocking mass mortality event.” She and another diver found dead and dying coral and sponges covered by a thick, white film on large but separate patches of the reef.

Steve Gittings, chief scientist for the National Oceanic and Atmospheric Administration’s Office of National Marine Sanctuaries, said in an interview, “People get quite emotional about that place. It’s the one place I can go where nature is in charge of what I see.”

Sports divers discovered the damage Monday on the East Flower Garden Bank, about 110 miles southeast of Galveston, NOAA said in a report Friday.

Hickerson said she and other scientists were conducting an annual monitoring project on a boat about 900 yards from the motor vessel Fling when word of the die-off reached them on the ship radio.

Divers from the Fling “were stunned to find green, hazy water, huge patches of ugly white mats coating corals and sponges, and dead animals littering the bottom of the East Flower Garden Bank, a reef normally filled with color and marine life,” the report said.

The Texas A&M University at Galveston research vessel Manta left port late Saturday with a team of scientists hastily rounded up for an expedition aimed at finding out what caused the die-off, Anthony Knap, a Texas A&M College Station professor of oceanography, said a few hours before boarding the Manta.

The Manta will collect water samples at 20 locations in the Flower Garden Banks and take measurements that will allow the deployment of underwater drones operated remotely over the reefs from College Station, Knap said.

NOAA is recommending that the public avoid diving, fishing or boating in the affected areas of the sanctuary until more is known about the problem. The agency wants to prevent visitors from inadvertently carrying the problem to an unaffected area and to protect divers from possibly ingesting harmful toxins or bacteria.

“At present, we are not aware of any specific risks to humans, but we are recommending this action as a precaution until more is known about the cause,” said Sanctuary Superintendent G.P. Schmahl.

The Flower Garden Banks reefs are considered one of the healthiest in the world at a time when a quarter of coral reefs worldwide are deemed to be damaged beyond repair and two-thirds are under serious threat, according to the World Wildlife Federation.

About 50 percent of corals were dead in some of the affected areas, the report said, but scientists were still trying to determine the size of such areas. The damage has been seen at three dive sites so far.

Oddly, there was no sign of damage at a site where Hickerson was working. That site has been used since the late 1980s by scientists to monitor the health of the reef. “Twelve miles away, the reefs of the West Flower Garden Bank remain vibrant, bathed in clear blue water and free of the problems for now,” Gittings wrote.

Scientists are investigating possible causes, including poor water quality, disease and chemical spills, the report said. Each alone could kill organisms, but it’s more likely a combination, the report said.

“We know of no spills that have recently occurred near the Flower Garden Banks,” Schmahl said, “but water temperature over the banks is quite high, at 86 degrees.”

Scientists also are concerned about large plumes of low-salinity coastal water that have moved offshore following months of heavy rainfall in the region and that could be sucking oxygen from the water. The coastal water is rich with plankton, nutrients and chemicals from the runoff, the report said. As the plankton dies, it falls to the bottom and is dined on by bacteria that drain oxygen from the water, causing a bacteria population explosion and a drop in oxygen levels.

Gittings said fresh water plumes normally don’t extend as far as the reefs. If the plumes are responsible, there is hope this could be a one-time event, he said. But scientists also fear that climate change could make large rain events more common. “If it’s the new normal, then the reefs are in trouble because the reefs are not adapted to this type of thing,” Gittings said.

“Overall, however, the health and stability of the sanctuary’s invertebrate and fish populations have been in stark contrast to coral reefs around the world that have degraded over the last four decades,” the report said.

The die-off has caused concern that the isolation of the banks may no longer shield it from “human impacts,” the report said.

The problem now is to determine what is causing the die-off. “The sanctuary and the science community are desperately trying to figure that out,” the report said.