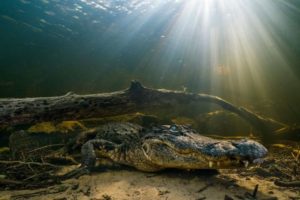 It’s not easy to push an alligator around, but hurricanes have been known to move them miles from home. Shown here is a resident of Everglades National Park, Florida. Photograph by Keith Ladzinski, National Geographic Creative

Storms like Hurricane Florence take a toll on marine life and carry in surprises for beachcombers.

While the catastrophic aftermath of Hurricane Florence is being dealt with on land, we wondered what happens beneath the sea during such storms.

Some surprising animals can wash onto the beach after storms, including deep-sea creatures. What other unusual critters wash up far from home in rough weather, and how do they get there?

As a hurricane moves across the ocean, it causes what’s known as upwelling, “where you get the bottom water coming up to the surface.” says George Burgess of the Florida Museum of Natural History. That pushes animals in deep water towards shore, he says. (Related: How National Geographic Has Mapped Hurricanes Over 140 Years.)

And upwelling is a powerful force. The effect of wind and churning waves can affect marine life as deep as 300 feet.

In fact, before scientists were better equipped to explore the oceans, new species of deep-sea fish were often discovered only when they washed up on shores after storms, Burgess says.

One animal that often rises from the deep is the oarfish, “the original sea monster,” which was depicted turning over ships in engraving prints that go back half a century, Burgess says.

“Of course it doesn’t do that, but it does get big,” Burgess says. Oarfish, which only eat plankton, can reach up to 56 feet long (17 meters). Part of the reason they may be so surprising when they turn up is that they’re thought to live at depths of around 3,300 feet, (1,000 meters) so they aren’t seen very often, though they inhabit in tropical waters around the world. (Related: 5 Surprising Facts About the Oarfish That Has Been Washing Up On Beaches.)

Another large creature that washed up on a Texas shoreline after Hurricane Harvey in 2017 was identified as likely being a fang-tooth snake eel, an animal that usually lives at depths of 300 feet (91 meters).

Frequent finds for beachcombers in New England are the big jaws of goosefish, called “all-mouth” by fisherman in the Northeast. Burgess has watched Mallard ducks disappearing one at a time as they sat in a hole in the ice of a bay. They were being gulped down whole by a goosefish just under the surface.

Goosefish are great eaters, but slow movers and poor swimmers. Burgess says they may get stuck on shore in storms and die of hypothermia, unable to get back to deeper waters.

It’s not just fishes that blow onto the beach. Empty egg cases from animals such as lightening whelks and skates, whose empty egg cartons are also called a mermaid’s purse, are frequent post-storm finds.

Last February, U.K. beaches were carpeted with dead starfish due to a mix of cold weather and Storm Emma.

And in 2012 Hurricane Isaac left 1,500 dead nutria, a beaver-like rodent, dead on the beaches of Mississippi.

Sometimes animals don’t wash up during storms—they wash out.

Shortly after Hurricane Katrina in 2005, marine ecologist Nancy Rabalais of Louisiana State University went diving with her colleagues to check oxygen levels using underwater instruments at an observing system off the Louisiana coast.

“At the site where we were diving was an alligator that had apparently been transported offshore about 15 miles,” Rabalais says. The big reptile stayed at the surface near their boat, and kept returning.

What’s a scientist to do?

“We just went about our diving and kept an eye out,” says Rabalais, for whom gator encounters are just a fact of southern Louisiana life.

Scientists are brave. For most of us, the dive would have been the washout, not just the gator.