In 2007, oxygen sensors, nutrient meters, and light meters were combined with the meteorological and physical data captured by the LSU WAVCIS system, with real-time transmission of data over the Internet. This station captured near surface and near bottom oxygen, salinity, temperature, turbidity and chlorophyll biomass. The data were paired with current meter data, meteorological data and wave and water level data. This coupling resulted in a coordinated interdisciplinary study of the physical and biological dynamics underlying the formation, maintenance and duration of hypoxia under the expanded acronym of WAVCIS/BIO2. Budget cuts ended the real-time transmission of data in October 2013 by WAVCIS. The instruments for oxygen monitoring were removed in December 2013, and the mounts for the oxygen meters were removed in June of 2014. Other parts of the system remain to be removed, at least the Oxygen Time Series cabling and the overall WAVCIS system.

CSI-9 Platform:The CSI-9 station is attached to an oil platform. 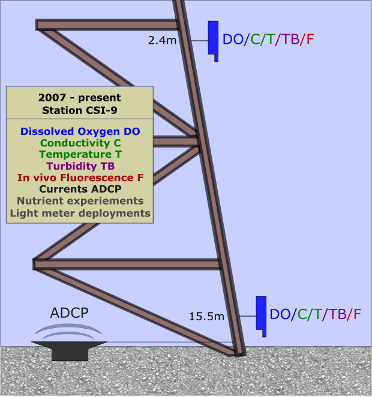