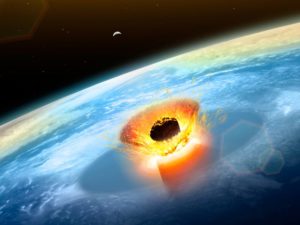 About 66 million years ago, an asteroid more than 10 kilometers wide struck Earth, as seen in this artist’s rendering. The impact did more than bring an end to the reign of the dinosaurs. According to new research, it also ushered in a period of rapid global warming that helped deplete oxygen from vast stretches of the oceans. Credit: Mark Garlick/Science Photo Library/Getty Images

The discovery reveals similarities between the extinction event that ended the Mesozoic Era and human-driven global warming.

About 66 million years ago, an asteroid more than 10 kilometers wide struck Earth, as seen in this artist’s rendering. The impact did more than bring an end to the reign of the dinosaurs. According to new research, it also ushered in a period of rapid global warming that helped deplete oxygen from vast stretches of the oceans.

About 66 million years ago, an asteroid roughly 10 kilometers wide hit Earth in what is today the Gulf of Mexico. It brought annihilation: All the dinosaurs except for the birds went extinct; forests around the planet vanished temporarily, killing off all bird species that lived in trees; dust and other aerosols blocked the Sun, and global temperatures took a nosedive. The world plunged into a state analogous to nuclear winter.

“The global warming following the impact is one of the most rapid warmings in Earth’s history,” said Johan Vellekoop, a geologist at KU Leuven in Belgium who led the new research. “It’s on a human timescale.” He described that the postimpact warming happened over the course of only a few hundred to a few thousand years.

By comparison, humans have been injecting carbon dioxide (CO2) into the atmosphere—and driving global warming in the process—for about 200 years, since the start of the Industrial Revolution. Vellekoop and his team note in a paper published in Geology earlier this summer that as today’s warming continues unabated, the oceans appear poised to become anoxic once again.

When the asteroid struck, it hit a platform of carbonate rock that was about 3 kilometers thick, creating a feature called the Chicxulub crater. Carbonate rock, when vaporized by something like a giant asteroid, releases CO2 into the atmosphere; previous work estimates that the amount of CO2 injected into the air after the impact equaled about 1,400 gigatons. By comparison, humans injected roughly 32.5 gigatons of CO2 into the atmosphere in 2017 alone.

After the impact, the event akin to nuclear winter descended, which saw global average temperatures fall by about 25°C, explained Timothy Bralower, a marine geologist at Pennsylvania State University who was not involved in the new research. The winter probably lasted for only a few years, and then as the dust cleared, global warming got going, and sea surface temperatures climbed by 1.5°C to 2°C.

And Then There Was Anoxia

This increase suggests ancient shallow oceans were relatively warm places, Bralower explained, because warmer ocean waters have a harder time retaining dissolved oxygen than colder waters. In such a world, there are oxygen “dead zones” where oxygen is scant or completely absent.

And dead zones, explains Vellekoop, would have helped devastate marine ecosystems, especially shallow-water seafloors where creatures like corals and bivalves dwelled, during postimpact warming. Such coastal waters, Vellekoop explains, “are the places with the highest diversity.”

A Mirror in the Past

In the course of geologic events, many things tend to happen on relatively long timescales. But an asteroid impact is an exception. It is, almost by definition, instantaneous.

“The slower the change, the better it is for life.” Such rapidity, explained Ellen Thomas, a paleoceanographer at Yale University who was not involved in the work, makes this ancient warming analogous to today’s human-driven global warming, which is close to being as quick as asteroid-related warming. “Although the causes are slightly different, and the timescale may be different, the basic principles are the same,” she said.

Life can adapt in the face of such change, Thomas added, but how much it is able to do so depends on the rate of change. Basically, “the slower the change, the better it is for life,” she said.

Today, because some areas of the oceans are already showing signs of oxygen depletion, the threat is not as much from off planet as it is from within, Thomas explained. Thus, if temperatures continue to climb in the coming century, humanity seems poised to become its own kind of asteroid.