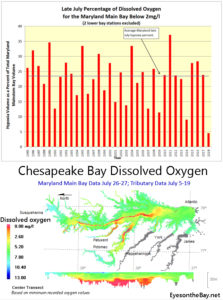 Due to extreme summer weather, dissolved oxygen conditions in Maryland’s portion of the Chesapeake Bay mainstem were the best ever observed in late July, reports the Maryland Department to Natural Resources. The department tracks hypoxia throughout the summer during twice monthly monitoring cruises.

The hypoxic water volume (areas with less than 2 mg/L oxygen) was 0.26 cubic miles.*

Hypoxia was constrained to the deepest parts of the main bay channel at depths of 65 feet or greater. This was likely the result of massive rainfall in central and northern Maryland and Pennsylvania, which resulted in near maximum monthly water flows throughout the watershed. This wall of freshwater, accompanied by sustained winds of 20 knots before sampling, reduced stratification of the water column and mixed oxygen well into the system.

The impact of runoff from the recent summer storms will have to be further examined to determine potential impacts to aquatic life and submerged aquatic vegetation (underwater grasses), as well as its contribution to algal blooms and hypoxia.

In the beginning of June, National Oceanic and Atmospheric Administration, U.S. Geological Survey, University of Maryland Center for Environmental Science and University of Michigan scientists predicted a slightly larger than average hypoxic volume for the bay due to higher spring flows and nitrogen loading from the Susquehanna and Potomac rivers.

Each year (June-September), the Maryland Department of Natural Resources computes these volumes from data collected by Maryland and Virginia monitoring teams. The Virginia mainstem is monitored by Old Dominion University under contract to Virginia Department of Environmental Quality. Data collection is funded by these states and the Environmental Protection Agency’s Chesapeake Bay Program.

*A station at the Maryland/Virginia line and another at the mouth of the Potomac River were not sampled due to waves and wind. The missing data could have produced a slightly lower estimate of hypoxic area.