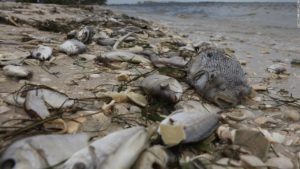 Off Sanibel Island, Florida (CNN) On a good day, a beach trip to Sarasota or a boat trip out of Fort Myers can be a sun-kissed adventure filled with relaxation and anticipation.

These are not good days.

The infamous “red tide” has turned southwest Florida into a tragic dead zone with miles of deserted beaches and boatfuls of dread.

The worst toxic algae bloom in recent memory is plaguing paradise and no one has any idea how long it will last and whether this is the new normal.

“Back in 1994 we had an outbreak and it killed 196 manatee,” says Bob Wasno, a marine biologist with Florida Gulf Coast University. “Everybody was just completely outraged. They yelled and jumped up and down and said ‘This is not going to happen again.’ Here we are 24 years later and this is worse than ever.”

The daily sightings of dead dolphins and lifeless sea turtles, beaches covered in rotting fish and the first recorded loss of a massive whale shark are all the result of a tiny organism known as Karenia brevis. It occurs naturally in saltwater, produces a neurotoxin deadly to most fish and marine mammals and is potentially harmful to humans.

But while red tides have broken out in Florida for centuries, scientists believe they may be getting worse after generations of unchecked development, water mismanagement and the new scourge of climate change.

“The real question is exactly what role (human) activity is playing on red tides,” says Dr. Mike Parsons, a red tide expert at Florida Gulf Coast University. “Between water discharges, our use of agricultural nutrients, the development of Florida and warming seas — are we poking the bear?”

I rode along as Parsons and his colleague, Dr. Bill Mitsch, set out to sample water 20 miles off the coast of Fort Myers.

It’s where the briny Gulf of Mexico mixes with the fresh water that flows down the Caloosahatchee River from Lake Okeechobee, and Mitsch hopes it will yield an answer. “I’m looking for the smoking gun,” he says.

Generations of sugar cane farming has altered the chemistry of Florida’s biggest lake and a vast system of dikes and dams built to “drain the swamp” and create a retirement wonderland has killed half of the Everglades and put the rest of this vital wetland on life support.

In the wet season, Florida dumps massive amounts of Okeechobee’s nutrient-rich water into the most delicate ecosystems, while in the dry season, that water is diverted to farms and cities.

While this feat of engineering has proven great for the economy, it has been disastrous for the environment, and Mitsch’s experiment may prove that America’s sugar and farming habits are also making red tides worse. But given the political influence of “Big Sugar” over a Republican-led, pro-growth state, even if he finds the smoking gun, he doubts anything will change.

“I think the story would be on CNN,” he tells me. “It would certainly be in ‘Science’ magazine, but whether that would translate to any change in politics? I have to say I doubt it. I wish it would. But I think that we need more scientists, different CSI teams who will try to match the pollution source.”

Long the target of environmentalist and sports fishing ire, U.S. Sugar is devoting an entire website to defending its practices. “We share in the frustration over the Lake Okeechobee discharges,” the company said.

“We want to collaborate in finding solutions that improve water storage and reduce the risk of discharges occurring again. But reckless and mean-spirited attacks — which are part of their ongoing vendetta against sugarcane farmers — misdirect the focus away from any meaningful discussion of the facts that will lead us to real solutions. That these radicals are blaming a single company, U.S. Sugar, for systemic regional problems wrought by over 100 years of change is utterly ridiculous.”

Off Sanibel Island, we find a pod of dolphins struggling in the toxic waves. As the sea spray kicks the algae into the air, our throats and eyes burn, so it’s hard to imagine the agony of the animals around us.

On a nearby beach, normally covered with Europeans on August holiday, we find a handful of cleanup workers, raking dead eels and horseshoe crabs from the sand.

“Have you seen red tides this bad?” I ask Thomas Ford, a worker with Crowder Gulf Disaster Management. “No,” he shakes his head. “Who’s to blame?” I ask.

“I think we are all to blame to be honest. I think we all play a role in this one way or another. It goes all the way up the chain and all the way down. We just need to come together and let the scientists get to the bottom of it.”