Covering extreme weather: What to avoid and how to get it right 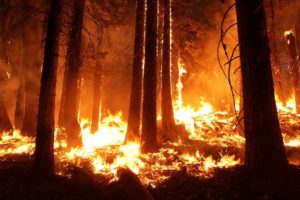 When extreme weather occurs, questions of whether and how climate change contributed to the event loom large. According to Rick Weiss, director of SciLine and past science reporter for the Washington Post, it’s a fraught area, and reporters can easily veer from what the research says.

“We saw that some stories didn’t mention climate change at all as a possible contributor, while other stories seemed to intimate that climate change was the reason why we had heat waves, droughts, floods and wildfires,” he said in a phone call with Journalist’s Resource. “Neither of these types of stories were right.”

“We know this is an area where there is a body of solid science,” Becky Hazen, associate director for news and operations at SciLine, added, referencing advances in computer modeling that allow scientists to make quantitative connections between extreme weather events and climate change.

That’s where SciLine comes in. The service, hosted by the American Association for the Advancement of Science, launched in October 2017 with a simple purpose: to strengthen the quality of news coverage by giving reporters easy access to the latest scientific evidence, Weiss says.  (Its mission is similar to that of Journalist’s Resource, but with a focus on the physical, environmental and health sciences.)

“Our concern is that to the extent that reporters are confused about certain areas of science, the typical reaction is ‘I’m not going to get into that in my story,’ and that’s a real loss,” Weiss told Journalist’s Resource. “We help reporters get the science right and feel confident about it, so they can actually get it into their stories.”

Below, Weiss and Hazen break down common errors in coverage of extreme weather and offer tips drawn from the scientific literature (and fact-checked by experts) on how to cover the topic more accurately.

WHAT TO AVOID: Forgetting to define “increase” when covering increases in extreme weather.
“Increase” can refer to the frequency of weather events, their intensity, or both.

HOW TO GET IT RIGHT:  Be specific.
When discussing torrential rainfall, for example, be clear whether the increase you are describing means these rain events are happening more often or are more intense or both.

Also, be sure to include a baseline of comparison when describing events that have become more frequent or more severe. For example, it isn’t enough to report that “a 2013 study predicted that by mid-century, the U.S. wildfire season would be about three weeks longer and up to twice as smoky.” You need to include “compared to what?” (In this case, the baseline for comparison was the average fire season length and average degree of smokiness measured between 1980 and 2004.) Similarly, you can report factually that, since 1991, the number of extreme downpours in the U.S. has increased by more than 30 percent — as long as you include the baseline for comparison (which, in this case, is the average frequency of similarly extreme downpours from 1901 to 1960).

WHAT TO AVOID: Attributing the number of wildfires or the costs of fires directly to climate change.
People ignite the vast majority of fires (e.g., from fireworks) compared to those caused by natural processes (e.g., from lighting strikes), so human behavior is going to have a much bigger impact on numbers of fires than climate change will. Further, since most fires started by people occur near development, such as houses and other buildings in or near the woods, those fires tend to be the most expensive in terms of the value of property destroyed.

HOW TO GET IT RIGHT: Note that links between climate change and wildfires tend to be strongest for fires in uninhabited and relatively inaccessible expanses of forest — and be clear about the climate-related factors most closely linked to fire risk.
For example, a warming planet is leading to more drought in many areas and an increase in drier fuel; facilitating the spread of invasive insects (which can kill trees and increase fuel load) and invasive plants (including highly flammable grasses such as cheatgrass); and, in some areas, increasing the number or severity of thunderstorms, which increases the odds of lightning ignition. Of these, the strongest link between climate change and wildfires is warming temperatures contributing to fuel aridity – that is, dry weather turning trees and grass into tinder.

WHAT TO AVOID: Focusing too heavily on the amount of area burned when trying to convey the severity of a wildfire.
Some ecosystems benefit from wildfires, and others even need them now and then to trigger seed germination and provide other eco benefits. Focusing exclusively on the amount of area burned doesn’t provide a full picture of how “bad” a wildfire really is (or isn’t).

HOW TO GET IT RIGHT: Ask about and report on fire severity.
Fire severity is how wildfire experts convey the degree to which a site has been altered or disrupted by fire. In general, fire severity can be thought of as the product of both fire intensity and how long the fire lasted.

WHAT TO AVOID: Assuming that scientists have equal levels of confidence in attribution analyses, which determine the role climate change played in extreme weather, for different types of weather events in different places.
Accurate extreme weather attribution analysis depends on comparison to historical records. While certain parts of the world have robust observational records over long periods of time for certain aspects of weather (e.g., temperature extremes in North America), this isn’t the case in some other parts of the world or for other kinds of weather extremes (e.g., the observational record for North American tornado intensity is relatively short).

HOW TO GET IT RIGHT: Include this context in news stories and communicate how well scientists understand the role of climate change for the region and type of weather you are covering.
Specifically, scientists are confident that climate change is already causing an increase in the frequency and/or intensity of the following types of extreme weather or weather-related events, but their confidence in “how much” of that increase is from climate change is highest for the top of this list and lowest for the bottom items.

WHAT TO AVOID: Describing current-day extremes as the “new normal.”
The climate that people are experiencing right now has not stabilized. Even if greenhouse gas emissions were stopped today, temperatures and extreme weather events are going to continue to increase.

HOW TO GET IT RIGHT: Don’t imply we’ve made it through the worst. We have yet to see what the new normal will be, but it will surely be more abnormal than what we’re seeing today, Weiss says. Looking for more help? SciLine also offers a matching service, connecting reporters with diverse, expert sources – over 7,000 scientists are part of their growing database. They also offer fact sheets on newsworthy scientific topics designed specifically for journalists on deadline and live, online media briefings. For additional resources on attribution science (the study of the role climate change plays in weather events), check out the following: