The grandfather of modern corn may hold the key to reducing its need for chemical fertilizers. 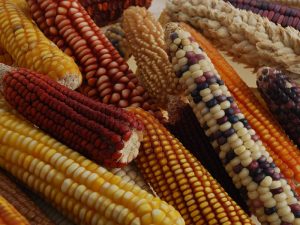 Corn has changed dramatically since humans in Mexico first encountered its ancestors nearly 9,000 years ago. These changes can readily be seen by examining teosinte, corn’s ancient forebear and a plant that still grows today.

Teosinte looks more like a weedy grass than a potential meal. An ear of teosinte contains just 5–12 kernels, each of which is sealed tightly in a stony casing.

But it’s the part of the plant that grows belowground that’s now intriguing scientists. Researchers think that studying teosinte’s roots may provide the key to one day making corn more adaptable and less reliant on chemical fertilizers.

Corn, or maize, became the sugary, high-yield crop it is today through thousands of years of selective breeding and, in the past century, the use of chemical fertilizers. “By domesticating and breeding modern maize, we may have lost some of its ability to adapt to organic agricultural systems that are less reliant on the synthetic fertilizer that we’ve been spoon-feeding it for the past 60–70 some years,” said Jennifer Schmidt, a plant scientist at the University of California, Davis. 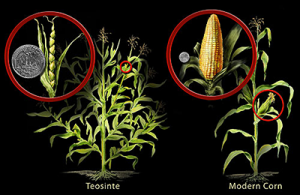 A side-by-side comparison of teosinte and modern corn. Credit: NSF

Prior studies have cataloged how humans have shaped corn aboveground, but Schmidt and her colleague Amélie Gaudin did something different. They looked for differences in the bacteria and fungi that colonize the roots of teosinte and modern corn. Schmidt presented her team’s researchon 13 December at the American Geophysical Union’s 2017 Fall Meeting in New Orleans, La.

Teosinte Versus Corn: An Evolution of Roots

Conventional agriculture is highly reliant on chemical fertilizers, which can pollute air, contaminate water, and even create oxygen-poor “dead zones” in the ocean. Reducing the amount of fertilizer to produce food may necessitate the development of crops that thrive without being “spoon-fed” nutrient-rich fertilizers, Schmidt told Eos. In other words, she explained, if we want a different kind of agriculture, we may need a different kind of plant.

Big-time commercial crops like corn have been engineered to thrive on large, conventional farms where they are packed into tight rows and their roots are regularly inundated with food and water. By selecting the plants that grow best under these conditions, we’ve changed corn’s roots, Schmidt continued. Modern corn has fewer, thicker roots that grow straight down, as though they’re all inside a narrow tube. These qualities allow corn to efficiently transport lots of nutrients without competing against the plant in the next row of the field.

Teosinte, on the other hand, sends out a large number of thinner, highly branched roots that are better suited to hunting down nutrients and water when they’re less available. Researchers like Schmidt think that the adaptations that allow teosinte to thrive in such conditions could give us insights into how to make corn a more efficient and eco-friendly crop.

Clues in the Microbiome?

As corn’s roots have diverged from teosinte and adapted to modern agriculture, researchers think that the microscopic communities they foster in the surrounding soil may have changed too. To help them extract more usable nutrients from the soil, plants often form symbiotic relationships with bacteria and fungi near their roots. They even attract specific types of bacteria and fungi by sending out sugars and chemical signals through their roots—food to encourage the growth of their preferred microbiome. In return, the microbes convert essential nutrients like nitrogen into forms the plant can use.

Schmidt and Gaudin are on a quest to identify the genes behind the bacterial and fungal relationships that allow teosinte to succeed in the wild, where nutrients can be scarce.

The team grew two types of modern corn and five varieties of teosinte in a controlled environment. They compared teosinte and modern corn in terms of how fast they grew as well as the microbial and fungal communities found around their roots. They also conducted the experiment using different types of soil: One soil came from an organic farm, and another came from a conventional farm; both had been farmed using these techniques for at least 25 years.

The team found that both modern corn and teosinte grew better in the organic soil. Teosinte is a smaller plant than modern corn, but when the team assessed new growth during the experiment relative to the size of the whole plant, teosinte—with its branched, searching roots—emerged as superior in the organic soil. This means that teosinte’s new growth was a bigger percentage of the whole plant compared to modern corn’s. The team also found that the fungal communities around the teosinte roots differed from those found at the roots of modern corn. Unexpectedly, the bacterial communities for teosinte and corn were similar.

“It’s important to note that this study was conducted with soils that have been farmed for 25 years,” said Timothy Bowles, an agroecologist at the University of California, Berkeley, who was not involved in the research. “These soils may have lost some of the wild microbes” that help teosinte thrive he explained.

Bowles suggested future studies using wild soils from teosinte’s natural habitat might find even bigger differences between the bacteria around the roots of teosinte and modern corn.

Helping Corn Fend for Itself

The traits that allow teosinte to thrive in organic soils could allow us to create crops better suited to the techniques of sustainable agriculture. The goal is to find the genes behind teosinte’s success and breed them into new varieties of corn created specifically for more eco-friendly farming.

This study looked at only a few varieties of teosinte, but its findings encourage assessing even more. “One of the promising things coming out of this work is that it shows variation in the communities colonizing the roots of these plants—that variation has a genetic component that we can screen plants for,” said Bowles.

So could we breed more eco-friendly corn? Perhaps. But “plant breeding is a long process; it could take 10–20 years to create something commercially available,” said Schmidt. It also depends on the interest on the part of companies developing new crops.

“It’s promising that there is so much interest in developing microbial products to replace fertilizers,” said Schmidt. “This goes one level below that, so you’re changing the seed instead of the soil.”