By Damian Carrington / The Guardian
January 4, 2018

Areas starved of oxygen in open ocean and by coasts have soared in recent decades, risking dire consequences for marine life and humanity

Ocean dead zones with zero oxygen have quadrupled in size since 1950, scientists have warned, while the number of very low oxygen sites near coasts have multiplied tenfold. Most sea creatures cannot survive in these zones and current trends would lead to mass extinction in the long run, risking dire consequences for the hundreds of millions of people who depend on the sea. 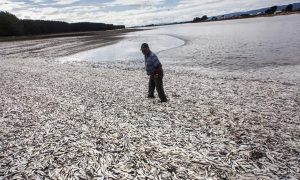 Climate change caused by fossil fuel burning is the cause of the large-scale deoxygenation, as warmer waters hold less oxygen. The coastal dead zones result from fertiliser and sewage running off the land and into the seas.

The analysis, published in the journal Science, is the first comprehensive analysis of the areas and states: “Major extinction events in Earth’s history have been associated with warm climates and oxygen-deficient oceans.” Denise Breitburg, at the Smithsonian Environmental Research Center in the US and who led the analysis, said: “Under the current trajectory that is where we would be headed. But the consequences to humans of staying on that trajectory are so dire that it is hard to imagine we would go quite that far down that path.”

“This is a problem we can solve,” Breitburg said. “Halting climate change requires a global effort, but even local actions can help with nutrient-driven oxygen decline.” She pointed to recoveries in Chesapeake Bay in the US and the Thames river in the UK, where better farm and sewage practices led to dead zones disappearing.

However, Prof Robert Diaz at the Virginia Institute of Marine Science, who reviewed the new study, said: “Right now, the increasing expansion of coastal dead zones and decline in open ocean oxygen are not priority problems for governments around the world. Unfortunately, it will take severe and persistent mortality of fisheries for the seriousness of low oxygen to be realised.”

The oceans feed more than 500 million people, especially in poorer nations, and provide jobs for 350 million people. But at least 500 dead zones have now been reported near coasts, up from fewer than 50 in 1950. Lack of monitoring in many regions means the true number may be much higher.

The open ocean has natural low oxygen areas, usually off the west coast of continents due to the way the rotation of the Earth affects ocean currents. But these dead zones have expanded dramatically, increasing by millions of square kilometres since 1950, roughly equivalent to the area of the European Union.

Furthermore, the level of oxygen in all ocean waters is falling, with 2% – 77bn tonnes – being lost since 1950. This can reduce growth, impair reproduction and increase disease, the scientists warn. One irony is that warmer waters not only hold less oxygen but also mean marine organisms have to breathe faster, using up oxygen more quickly.

There are also dangerous feedback mechanisms. Microbes that proliferate at very low oxygen levels produce lots of nitrous oxide, a greenhouse gas that is 300 times more potent than carbon dioxide.

In coastal regions, fertiliser, manure and sewage pollution cause algal blooms and when the algae decompose oxygen is sucked out of the water. However, in some places, the algae can lead to more food for fish and increase catches around the dead zones. This may not be sustainable though, said Breitburg: “There is a lot of concern that we are really changing the way these systems function and that the overall resilience of these systems may be reduced.”

The new analysis was produced by an international working group created in 2016 by Unesco’s Intergovernmental Oceanographic Commission. The commission’s Kirsten Isensee said: “Ocean deoxygenation is taking place all over the world as a result of the human footprint, therefore we also need to address it globally.”

Lucia von Reusner, campaign director of the campaign group, Mighty Earth, which recently exposed a link between the dead zone in the Gulf of Mexico and large scale meat production, said: “These dead zones will continue to expand unless the major meat companies that dominate our global agricultural system start cleaning up their supply chains to keep pollution out of our waters.”

Diaz said the speed of ocean suffocation already seen was breathtaking: “No other variable of such ecological importance to coastal ecosystems has changed so drastically in such a short period of time from human activities as dissolved oxygen.”

He said the need for urgent action is best summarised by the motto of the American Lung Association: “If you can’t breathe, nothing else matters.”