Chemicals in Farm Runoff Rattle States on the Mississippi

Chemicals in Farm Runoff Rattle States on the Mississippi 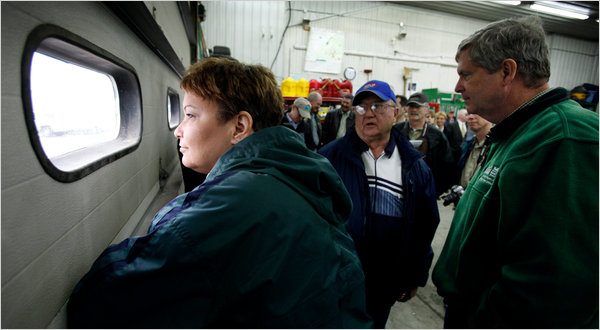 Lisa P. Jackson, administrator of the Environmental Protection Agency, and Agriculture Secretary Tom Vilsack, right, with Gordon Wassenaar during a visit to his farm in Prairie City, Iowa.

As the surging waters of the Mississippi pass downstream, they leave behind flooded towns and inundated lives and carry forward a brew of farm chemicals and waste that this year — given record flooding — is expected to result in the largest dead zone ever in the Gulf of Mexico.

Dead zones have been occurring in the gulf since the 1970s, and studies show that the main culprits are nitrogen and phosphorus from crop fertilizers and animal manure in river runoff. They settle in at the mouth of the gulf and fertilize algae, which prospers and eventually starves other living things of oxygen.

Government studies have traced a majority of those chemicals in the runoff to nine farming states, and yet today, decades after the dead zones began forming, there is still little political common ground on how to abate this perennial problem. Scientists who study dead zones predict that the affected area will increase significantly this year, breaking records for size and damage.

For years, environmentalists and advocates for a cleaner gulf have been calling for federal action in the form of regulation. Since 1998, the Environmental Protection Agency has been encouraging all states to place hard and fast numerical limits on the amount of those chemicals allowed in local waterways. Yet of the nine key farm states that feed the dead zone, only two, Illinois and Indiana, have acted, and only to cover lakes, not the rivers or streams that merge into the Mississippi.

The lack of formal action upstream has long been maddening to the downstream states most affected by the pollution, and the extreme flooding this year has only increased the tensions.

“Considering the current circumstances, it is extremely frustrating not seeing E.P.A. take more direct action,” said Matt Rota, director of science and water policy for the Gulf Restoration Network, an environmental advocacy group in New Orleans that has renewed its calls for federally enforced targets. “We have tried solely voluntary mechanisms to reduce this pollution for a decade and have only seen the dead zone get bigger.”

Environmental Protection Agency officials said they had no immediate plans to force the issue, but farmers in the Mississippi Basin are worried. That is because only six months ago, the agency stepped in at the Chesapeake Bay, another watershed with similar runoff issues, and set total maximum daily loads for those same pollutants in nearby waterways. If the states do not reduce enough pollution over time, the agency could penalize them in a variety of ways, including increasing federal oversight of state programs or denying new wastewater permitting rights, which could hamper development. The agency says it is too soon to evaluate their progress in reducing pollution.

Don Parish, senior director of regulatory relations for the American Farm Bureau Federation, a trade group, says behind that policy is the faulty assumption that farmers fertilize too much or too casually. Since 1980, he said, farmers have increased corn yields by 80 percent while at the same time reducing their nitrate use by 4 percent through precision farming.

“We are on the razor’s edge,” Mr. Parish said. “When you get to the point where you are taking more from the soil than you are putting in, then you have to worry about productivity.”

Dead zones are areas of the ocean where low oxygen levels can stress or kill bottom-dwelling organisms that cannot escape and cause fish to leave the area. Excess nutrients transported to the gulf each year during spring floods promote algal growth. As the algae die and decompose, oxygen is consumed, creating the dead zone. The largest dead zone was measured in 2002 at about 8,500 square miles, roughly the size of New Jersey. Shrimp fishermen complain of being hurt the most by the dead zones as shrimp are less able to relocate — but the precise impacts on species are still being studied.

The United States Geological Survey has found that nine states along the Mississippi contribute 75 percent of the nitrogen and phosphorus. The survey found that corn and soybean crops were the largest contributors to the nitrogen in the runoff, and manure was a large contributor to the amount of phosphorus.

There are many other factors, of course, that determine what elements make it from crops into river water, for example, whether watersheds are protected by wetlands or buffer strips of land.

John Downing, a biogeochemist and limnologist at Iowa State University, said structural issues were also to blame. Many farms in Iowa, he said, are built on former wetlands and have drains right under the crop roots that whisk water away before soils can absorb and hold on to at least some of the fertilizer.

Still, overapplication of fertilizers remains a key contributor, he said. “For farmers, the consequences of applying too little is much riskier than putting too much on.”

Hemmed in by the antiregulatory mood of Congress and high food costs, the Obama administration has looked to combat Mississippi River pollution through an incentive program introduced in 2009 by the Department of Agriculture that encourages a variety of grass-roots solutions, from wetlands creation to educating farmers on just-in-time application.

The Mississippi River Basin Healthy Watersheds Initiative provides $320 million in grant money, which has so far been spread among 700 projects in 12 states, projects proposed by farmers, environmental groups and local governments. So far, the department says the results are quite promising. Phosphorus and nitrogen found in surface runoff from 150,000 acres enrolled in the program have decreased by nearly 50 percent.

That amount of land is just a drop in the bucket for the vast Mississippi watershed, but Agriculture Secretary Tom Vilsack thought it was promising enough to invite the administrator of the Environmental Protection Agency, Lisa P. Jackson, to visit one of the farms in the program.

“There is fear, real fear, in Iowa that we’ll take what we’re doing in Chesapeake Bay and transfer it here without regard to what’s already happening on the ground,” she said during her trip in April, adding she appreciated the opportunity “to ensure that isn’t our approach.”

Mr. Vilsack said that farmers had come a long way toward understanding their effect on ecosystems downstream and that what they needed were government incentives and creation of private markets — where, for example, farmers who do a lot of conservation could receive payments from farmers who do not — to help them improve environmental safeguards while they also keep food production high.

“A lot of folks are basing criticism and concerns on the way agriculture was, not the way it is now,” Mr. Vilsack said in a phone interview.  “We as a nation have an expansive appetite for inexpensive food. To produce more, you have to turn to strategies like chemicals and pesticides.”

That stance infuriates Dave Murphy, founder of Food Democracy Now!, an Iowa nonprofit that advocates for smaller organic farms. He argues that voluntary programs are a subterfuge.

“As is standard in Iowa and other states, voluntary regulation by the polluters and the industry themselves is the preferred method of getting around any serious environmental enforcement,” he said.

Even some farmers do not disagree. Chris Petersen, president of the Iowa Farmers Union, which represents small farmers, said the country’s policy were not working. “We’ve been trying to do this for years, and we are just not turning the corner.”

This article has been revised to reflect the following correction:

An earlier version of this article used an incorrect spelling of a chemical that runs off into rivers from crop fertilizers and animal manure. It is phosphorus, not phosphorous.