The Agriculture Chief as Water Advocate

The Agriculture Chief as Water Advocate

Most people do not realize the intense relationship between modern agriculture and water quality. In an article in Friday’s paper, I write about a dead zone in the Gulf of Mexico near the mouth of the Mississippi River and how it has been linked to runoff from farms, largely from chemicals used as fertilizers.

My article did not mention that runoff from farms is also polluting drinking water in the farm states themselves, including Iowa, where local lakes are experiencing their own outbreaks of algae. 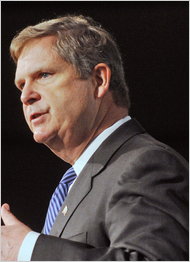 Because farm runoff has been such a big cause of pollution, many advocates are wary and skeptical about the active role that Agriculture Secretary Tom Vilsack is taking on water quality.

Mr. Vilsack was previously governor of Iowa, and during his tenure he was a major proponent of corn-based ethanol. Critics say that congressional subsidies for corn crops intended for biofuels production helped spur Iowans to plow under many wetlands. Wetlands, which retain and purify water, are central to preserving water quality.

But if Mr. Vilsack’s record is complicated, it is clear that as agriculture secretary he has been highly involved in innovative water-quality management programs, including the Mississippi Watershed Basin Initiative, mentioned in the article.

On Friday, the Department of Agriculture announced another such program, the Watershed Condition Framework. (The National Forest Service is under the U.S.D.A. umbrella, and forests are also crucial in protecting watershed.)

The framework provides a set of criteria for evaluating the health of any given watershed and identifying potential remediation projects and priorities for maintenance.

“Watershed restoration is not new to the Forest Service, but we now have new capabilities to assess and prioritize where resources are most needed,” the Forest Service chief, Tom Tidwell, said in a statement. “For the first time, we are laying out a process to allow data from local assessments to be collected, analyzed and evaluated to better understand existing conditions and the specific needs for restoration and maintenance at the national level.”