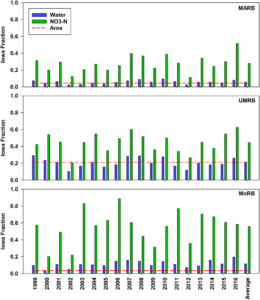 CEDAR RAPIDS — A new University of Iowa study shows the nitrate flowing from Iowa farmfields is a substantial part of the total load in the Mississippi and Missouri rivers.

From 1999 to 2016, Iowa’s average nitrate contribution to the Mississippi-Atchafalaya Basin was 29 percent, Upper Mississippi River Basin 45 percent and Missouri River Basin 55 percent, according to the study published April 12 in the journal PLOS One.

Iowa’s nitrate discharge is disproportionate to the amount of water flowing into rivers that border the state, indicating the increase in nitrate share isn’t due to weather, the study shows.

“This paints a clear picture that our state is a main contributor to the nitrate loads,” said Cindy Lane, water program director for the Iowa Environmental Council. “It’s a huge push for us to say ‘Iowans need to do our part. We need to be accountable.’ ”

Nitrogen is an essential nutrient in plant growth. But when it becomes too concentrated in water — which has happened in agricultural states like Iowa where it’s applied as fertilizer — nitrate can harm humans and animals.

These watersheds end near the Mississippi or Missouri rivers and have nearby U.S. Geological Survey gauges, which monitor water volume.

The non-Iowa share of nitrate in each river basin was significantly lower than the total river basin, indicating that without nitrate from Iowa, the total nitrate load in the three basins would be steady or declining.

The study’s authors suggest since Iowa deposits such a large share of the nitrate in these Midwest river basins, financial resources should be concentrated here to reduce the overall problem.

Iowa also should require metrics as part of its Nutrient Reduction Strategy and make conservation strategies, such as stream buffers, mandatory for farmers, said Jen Terry, executive director of the Iowa Environmental Council.

“The (Nutrient Reduction Strategy) is a promise that has fallen short,” she said. “We need to have adequate sustained funding with timelines. We need an accountability framework set up for the NRS, a non-voluntary framework for nonpoint pollution.”

The UI study is thought to be the first to quantify Iowa’s long-term contribution of nitrate to the Missouri River basin.