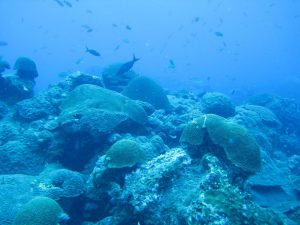 Over the years, diving to her beloved coral reefs in the Florida Keys began to feel more and more to Kristine DeLong like visiting a cherished older relative in hospice care. But the first time she saw the Flower Garden reef off Louisiana’s coast, it bowled her over.

“You’ve got to be kidding me,” the LSU associate professor recalled thinking as she sized up coral so large, they could have easily been 500 to 800 years old.

The coral is home to a variety of sea life — snappers, sharks and rays and even the occasional orca, DeLong said. However, at about 120 miles south of the Louisiana-Texas state line, it’s not a practical commercial fishery.

While rising sea temperatures have withered reefs around the word, the Flower Garden has largely held firm, since it’s located on a continental shelf salt dome about 60 feet underwater — isolated and deeper than many coastal reefs.

However, the water has warmed to greater depths over the past few years until now even the Flower Garden is feeling the heat.

LSU’s College of the Coast and Environment hosted Coral Reefs in Crisis programming this week that examined the plight of reefs with several scientists who collaborated on the recent Netflix documentary “Chasing Coral.”

Coral is an invertebrate animal that forms a protective calcium-based exoskeleton. Small organisms scientifically known as zooxanthellae live in coral, and the two organisms exchange food to their mutual benefit.

The microorganisms can’t tolerate water that’s too hot, and if they start to die, the coral will expel them. That happens around 86 degrees Fahrenheit, the Office of National Marine Sanctuaries wrote in a report on the Flower Garden.

Because the microorganisms are what give corals their vibrant color, pushing them out causes a coral to go pale, known as bleaching. A bleached coral will die in about a month if it can’t regain enough healthy microorganisms, explained LSU adjunct Prof. Paul Sammarco.

Half the world’s reefs have died in the past three decades; most will be gone by the 2050s, said Ruth Gates, Director of the Hawaii Institute of Marine Biology.

“Rates of warming are too fast to allow corals to adapt. … They are not recovering,” she said.

Losing reefs is of huge consequence because they are important for food production, the international economy and drug discovery, among other reasons, Gates said.

That’s why her team is working with Australian researchers to selectively breed tougher strains of coral by combining resilient organisms from around the world or by hybridizing similar species — the way farmers have bred hardier crops on land, a lecture attendee noted.

As scientists look to bolster coral around the world, the Flower Garden could be used to repopulate stressed areas around the Caribbean like Jamaica, which lost its reefs in the 1990s, DeLong said.

The Flower Garden has problems of its own, though they’re mostly minor so far. In 2016, scientists noticed  substantial populations of coral on about 6.5 acres of the reef had died, but that’s only about one percent of the total site, the Office of National Marine Sanctuaries reported last year. A follow-up survey showed that shallower coral was more likely to be affected.

Other factors can kill coral, like ocean acidification, which occurs when carbon dioxide gas is absorbed by the ocean and reacts with seawater to produce acid.

But so far it appears the Flower Garden has mostly been impacted by the heat, Sammarco said. That, too, is a result of rising carbon dioxide emissions.

Unfortunately, even if humans were to reverse their emissions today, it would still take decades for temperatures and other factors to come back down, Sammarco said.