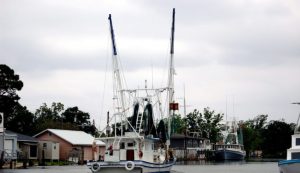 Gulf of Mexico shrimp fishermen are looking at 2018 with a mixture of apprehension and hope. There is apprehension because the past year’s record is not good. There is hope — at least for some — that new marketing techniques and product regimens, with a lot more of it involving fishermen than ever before, might make up for slack prices.

The prices themselves are not the issue, so much as the question marks surrounding management and practices, following a 2017 season that was rife with bad indicators.

For one thing, there’s been a dearth of shrimp of a decent market size.

“A lot of people are going to be hurting this winter,” said Kim Chauvin of David Chauvin Seafood in Dulac, La. “We are off by half.”

Shrimp numbering 21-25 to the pound were getting about $2.35 at the docks in Louisiana in January. What kind of price the critters will fetch when the 2018 spring season starts will depend, fishermen said, on whether that season will start when large, easily marketable shrimp area are still in the ecosystem.

Regulators were roundly criticized last year for a late start for the tests of shrimp in the water that determine when the season should start. Climate changes are resulting in shrimp being close to market size in April, while the season traditionally has not opened until May.

“I pray that the biologists will begin their testing much sooner than they have ever done before,” Chauvin said. “If they keep going by past data, they are going to miss that mark every single time. People tell us we can’t keep doing the same things over and over again to succeed. That has to work for the biologists, too.”

Adding to instability over the past year was an influx of weather problems.

Hurricanes and steady and ample rains before and after those storms fouled the season for many shrimpers in several states. More rains mean lower salinity, and cause shrimp to move in cycles shrimpers are not familiar with. Shrimp prefer higher salinity and will move as the levels change.

“Over the prior 15 years, Louisiana has averaged 6.4 million pounds of shrimp harvested in November,” said a Southern Shrimp Alliance report.

Throughout the Gulf of Mexico, November shrimp landings, at 8.9 million pounds, were 26.7 percent below the prior 15-year historic average of 12.1 million pounds.

The overall gulf figures were 8.9 percent below the prior 15-year historic average of 3.6 million pounds.

Alabama fared better than most states, however, with a 13.5 million pound haul, 44 percent more than its prior 15-year historic average.