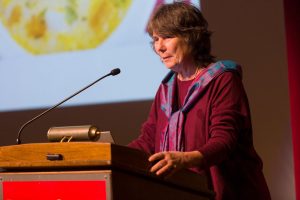 The Shell Oil Endowed Chair in Oceanography and Coastal Sciences at Louisiana State University Nancy N. Rabalais speaks on a growing concern to the Gulf of Mexico, a hypoxic zone where organisms struggle to survive. Sam Greene/Iowa State Daily

Leading researcher for Louisiana Universities Marine Consortium and Louisiana State University’s annual survey of the Gulf hypoxic zone, Nancy Rabalais spoke to a crowd of Iowa State community members Tuesday about the economic and environmental impacts of “The Dead Zone”.

“Things that used to live there don’t live there anymore, and some things are more abundant. That’s a pretty good line of evidence, and it correlates with the increase of nutrients in the river,” Rabalais said.

Rabalais has over 30 years of experience monitoring and studying the Gulf hypoxic zone, or Dead Zone, that has been forming at the end of the Mississippi River.

Tuesday she was invited to be the speaker of the annual LAS Ronald Lecture Series in Environmental Sustainability. A notable person in her field, she is also the Shell Oil Endowed Chair in Oceanography and Coastal Sciences at Louisiana State University and a 2012 MacArthur Fellow.

These nutrients are vital for the support of algae blooms than then use up the oxygen in the water. This lack of oxygen chokes up other marine life making it challenging and many times impossible for other marine life to survive, giving it its name, The Dead Zone.

Besides choking out marine life by taking away organisms oxygen, the dead zone disrupts marine life’s migration patterns and prevents some species from developing correctly as infants.

Rabalais also went over the economic impacts of the dead zone and what it had on different fishing economies such as the shrimping business.

“Big shrimp will get to a larger size but their not as catchable because you have to spend more time finding out where they are and when those are caught they have a high price but its such a high price that imports from overseas will come in and drive down the price,” Rabalais said.

The dead zone has greatly increased in size since the 1970’s and is getting worse as the years go on, its effects are found to be worse in the summertime because warmer water holds less oxygen. Its effects are also increasing as climate change continues and makes our ocean waters warmer each year.

The increase in nutrients that have been flowing into the Mississippi River are coming from a variety of things such as agriculture, deforestation, and manmade changes in the rivers floodplain.

“It is a multi-sourced issue but there are some things that just beg remedy,” Rabalais said.

One of the leading causes in the increase of nitrate comes from things like artificial fertilizers which make their way to the Mississippi through both runoff and point source ways of pollution.

To close her lecture Rabalais also talked about the recent 2010 oil spill and its effects on the region as well as goals both state and federal government groups have for the region. She then discussed how this problem of global hypoxic zones are starting to become more common and are occurring at many other places around the globe.

Rabalais also went over different ways we can help combat this crisis on a daily basis.

“This isn’t a call to arms but it’s a call to know that we can do something individually to make a difference,” Rabalais said.