Gulf of Mexico ‘dead zone’ will persist for decades 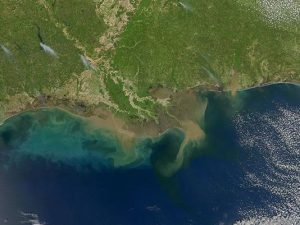 The annual “dead zone” in the Gulf of Mexico, which last year was the size of New Jersey, will continue for several decades, a new study said.

A dead zone occurs at the bottom of a body of water when there isn’t enough oxygen in the water to support marine life. Also known as hypoxia, it’s created by nutrient runoff, mostly from over-application of fertilizer on agricultural fields during the spring.

Nutrients such as nitrogen flow from North America’s corn belt through streams and rivers before ending up in the Gulf.

The nitrogen can spur the growth of algae, and when the algae die, their decay consumes oxygen faster than it can be brought down from the surface, the National Oceanic and Atmospheric Administration said. As a result, fish, shrimp and crabs can suffocate.

“Despite the investment of large amounts of money in recent years to improve water quality, the area of last year’s dead zone was 8,500 square miles,” said Kimberly Van Meter, lead author of the paper and a postdoctoral fellow at Canada’s University of Waterloo.

In fact, the study said that even if the runoff was completely eliminated, which isn’t likely, it would still take at least 30 years for the area to fully recover. According to the study, nitrogen can move very slowly through soil and groundwater systems, meaning runoff from agriculture can take decades to eventually reach the ocean.

“We are seeing long time lags between the adoption of conservation measures by farmers and any measurable improvements in water quality,” said Nandita Basu, a study co-author, also of the University of Waterloo.

Annual measurements of the Gulf dead zone began in 1985, though the zone likely started in the late 1950s, NOAA reported. An annual dead zone also forms in the Chesapeake Bay.

Scientists said that in order to come close to achieving a reduced target dead zone of 1,900 square miles by 2050, it would be necessary to bring nitrogen levels to zero — a scenario that the authors say is “not only considered unrealistic, but also inherently unsustainable.”

Additionally, dead zones aren’t just a U.S. issue, as Basu called it “a long-term problem for coastal habitats around the world.”