Gulf of Mexico ‘Dead Zone’ expected to be larger than Connecticut this summer, scientists say 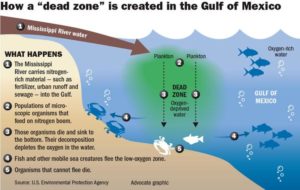 Once again, the Gulf of Mexico “dead zone” must be measured in the size of a U.S. state.

LSU scientists predict this summer’s iteration will exceed the size of Connecticut — about 6,620 square miles. The U.S. Geological Survey forecast 5,780 square miles. A tropical storm could stir up the water and drive the size down, both noted.

When nutrients like those from fertilizer and sewage drain into the Mississippi River and wash into the Gulf, they provide a feast for algae. And when the algae run out of food and die, their decomposition saps the water of oxygen, a state known as hypoxia. This kills shrimp, fish and other creatures in the water.

After the record-setting dead zone last year, 2018 is expected to return to about average size.

But that still makes it three-and-a-half times larger than the goal established 10 years ago by the EPA’s Hypoxia Task Force.

More than a third of the country — including the farms of the Midwest — eventually drains into the Mississippi, and so far, efforts to lower the river’s nutrient level have not been effective, LSU scientists wrote in a statement.

“It involves the whole country. … It’s a wicked problem. It’s complex and wishing it away is not going to work. We actually have to do something,” said Gene Turner, one of the forecasters.

To predict the size of the dead zone, researchers collect water from the Mississippi and Atchafalaya Rivers at St. Francisville and Morgan City, respectively, Turner explained.

They specifically looking for nitrogen, which is found in things like fertilizer runoff and which feeds the algae. The amount and concentration of nitrogen informs how large the dead zone will be. This year’s count was in the middle of the road.

Phosphorous is also sometimes mentioned as contributing to the dead zone, though Turner said it doesn’t seem to have a significant statistical effect.

Researchers also measure how warm, clear and salty the water is to better understand how the system may be changing, Turner said. For example, the same amount of nitrogen today would do more damage than in the 1970s, when the dead zone was first observed.

In the intervening years, the water in the continental shelf has warmed about one and a half degree due to climate change, Turner said. That makes algae decompose faster, sucking oxygen out of the water more quickly.

Excess nitrogen has other ill effects besides causing the dead zone, the USGS warned. In addition to making it harder to purify drinking water and treat wastewater, nitrogen can seep into groundwater.

That’s particularly concerning for well users whose infants may be vulnerable to fatal blue baby syndrome, a disorder that prevents their blood from transporting sufficient oxygen.

Angelina Freeman works at the Coastal Protection and Restoration Authority and represents Louisiana on Hypoxia Task Force’s coordinating committee. She said the group is taking meaningful, encouraging steps to reduce the amount of nutrients making their way into the Mississippi.

For example, she said, Iowa has worked with its water districts to integrate wetlands into aging systems when they’re upgraded. As the CPRA well knows, wetlands are useful for nutrient management because the plants that live in them can draw nitrogen out of the water.

Tulane ran a years-long contest to court nitrogen-reducing innovations and in December celebrated a team that developed new software that tracks farmers’ land and tells them when their fertilizer is low. That way, they don’t overfertilize, and less is wasted.

Turner suggested farmers plant cover crops like clover during the non-growing season to hold the soil together and prevent erosion when it comes time to till the fields.

The EPA aims to reduce nitrogen and phosphorous by 20 percent by 2025.

“River and Gulf models show us that as we continue to reduce nutrient loading to the Gulf, the Gulf of Mexico will respond. But it will take time to see significant changes in Gulf hypoxia because of the scale of the work that needs to be done and the lag time as nutrients work their way through system,” the agency wrote in response to a request for comment.