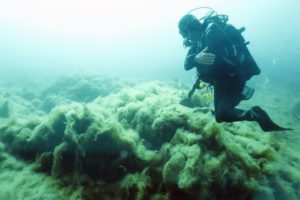 The number and size of oceanic dead zones is increasing.

The name says it all, but dead zones are areas along the sea floor where oxygen levels are so low they no longer sustain marine life. Hypoxia, which is a deficiency in the amount of oxygen reaching the tissues of organisms, is a widespread and growing problem in Earth’s oceans as industrial waste, fertilizer runoff from industrial agriculture and anthropogenic climate disruption increasingly aggravate the crisis.

An international team of scientists, sponsored in part by the National Oceanic and Atmospheric Administration’s (NOAA’s) National Centers for Coastal Ocean Science has published one of the broadest studies to date about declining oxygen in the world’s oceans.

One of the co-authors of the study is Nancy Rabalais, a professor in the Department of Oceanography and Coastal Sciences at Louisiana State University (LSU).

Rabalais, who is also a distinguished research professor at LSU’s Marine Consortium, told Truthout the dead zone in the Gulf of Mexico has, over the 31 years it has been measured, averaged 5,806 square miles in size.

“It remains the second-largest human-caused low oxygen area in global coastal waters,” said Rabalais, who discovered the Gulf dead zone and has been tracking it ever since. “In 2017, it was the largest ever measured: 8,776 square miles.”

Her and her colleagues’ research has also shown that there are now more than 400 coastal low-oxygen areas around the globe, and the number of dead zones started to double roughly every decade beginning in the 1960s.

Don Scavia, a professor emeritus of environment and sustainability at the University of Michigan, explained in detail what causes a dead zone.

“In the Gulf, as in most places where dead zones occur, the cause is excess nitrogen and/or phosphorus inputs coupled with a physical process called stratification,” Scavia, who was also NOAA’s chief scientist of the National Ocean Service and has authored over 200 papers in refereed journals, told Truthout. “The large nutrient inputs stimulate major blooms of algae that eventually settle into the deep waters.”

Furthermore, the decomposition of organic matter by bacteria uses oxygen, so physical stratification, which is caused by having warmer and/or fresher water layers to sit on top of colder and/or saltier layers, prevents atmospheric oxygen from replenishing the supply. Hence, the concentration of oxygen decreases throughout the summer until winter storms mix the water again.

This is why the excessive use of chemical fertilizers that contain phosphorous and nitrogen by the industrial agriculture sector are such a key factor in the creation of the massive dead zone in the Gulf of Mexico.

While pointing out that while there is year-to-year variability in size since measurements began, Scavia, who has written at length about the negative impacts, added that retrospective modeling work has indicated that the size of the Gulf of Mexico dead zone roughly tripled between the early 1970s and the 1980s.

The most recently published research on dead zones shows that there are five to six very large dead zones.

Matt Rota, the senior policy director at the environmental group Gulf Restoration Network in New Orleans, Louisiana, told Truthout he sees the dead zone in the Gulf of Mexico being on an “upward trajectory,” and agrees with Rabalais about the 2017 measurement being the largest it ever recorded.

“The prediction for the 2018 dead zone shows that it might not be as big this year. But is still forecasted to be almost four times the size of the Hypoxia Task Force‘s goal, which should have been reached in 2015,” Rota told Truthout, referring to an EPA group monitoring the dead zone.

“The biggest contributor is the fertilizer that flows off the fields of corn and soybeans in the Midwest,” he added.

Jason Scorse, chair of the International Environmental Policy Program at the Middlebury Institute of International Studies at Monterey, where he is also the director of the Center for the Blue Economy, sees dead zones as existing exclusively due to two factors: “Agricultural subsidies, in which industrial agriculture companies are incentivized to produce over-fertilization, which is the heart of the dead zone in the Gulf of Mexico,”  Scorse told Truthout. “The second is the bias in the overall food culture toward animal products, [which] magnifies all of this, since so much is going to meat production.”

Scavia described how organisms unable to swim away from the dead zones — like worms and other animals that many fish feed on — will die.

“Fish that can swim will avoid the dead zone, but that often forces them into habitats that are less suitable for them, resulting in slower growth,” Scavia said. “Sometimes the fish (especially shrimp) are forced into more confined areas, making them more vulnerable to predators, including human fishing nets.”

Rabalais added that the ocean’s ability to recover from dead zones can take time. “Improvement of oxygen conditions following excess nutrient flux may take years to decades,” she said.

Scavia said we should be concerned that thousands of square miles of water on Earth have low oxygen levels. “These regions are basically ‘taken out of production,’ and if this amount of land was taken out of production, there would be significant concern,” he explained. “These dead zones also put some of our most important fisheries at risk.”

He said that while there has not been a clear demonstration of impact on the Gulf shrimp fisheries, for example, there are strong case histories showing that when you increase nutrient loads to a system, fisheries increase to a certain point before they crash. “It is hard to know when you are reaching that tipping point,” Scavia said. “So, it is wise to avoid it.”

Rabalais agreed, and added that there is the very real potential for fisheries that depend on healthy coastal waters (i.e. all fisheries) to collapse, with resultant economic losses to boot.

Rota pointed out other impacts. “Studies have shown a link between the Gulf dead zone and smaller shrimp sizes,” he said. “The dead zone can interrupt shrimp migration, and force shrimpers to have to travel farther to make their catch, costing them more in fuel and ice, their two biggest expenses.”

These increases in fuel and ice costs also mean more energy is expended in both cases, further contributing to fossil fuel emissions.

As for a solution, aside from the obvious need to work to mitigate climate disruption and a dramatic curtailment of industrial agriculture’s use of chemical fertilizers, Scavia pointed out that the dominant source of nutrients flowing into the Gulf come from the industrial row crop agriculture of the upper Midwest — “the corn belt.”

“While there has been a federal-state-tribal action plan in place since 2001 with the goal to reduce those loads and push the dead zone back to the size of the 1970s, very little reduction has taken place,” Scavia explained. “It has been difficult, both technically and politically, to reduce those loads from agriculture because the programs in place to do that are all voluntary and based on incentives, not regulation.”

Scorse believes that since governments providing subsidies for industrial agriculture companies are a global problem, there must be a global solution.

“Industrial agriculture subsidies and commodity crop subsidies should be abolished,” he concluded. “… if you got rid of the subsidies … the world [would move] to more of a plant-based food culture.”

Until real solutions are implemented, dead zones continue to spread.