Just west of Los Angeles, decimated populations of spiny rockfish rummage for prey among bush-like corals. Cold currents from deep valleys wash nutrients between the Channel Islands, fertilizing plants that are eaten by fish. The fish are eaten by dolphins and pelicans and served with fries to diners watching ocean sunsets from Venice Beach.

Rockfish populations that crashed off the southern Californian coast in the 1990s have been protected by fishing rules and marine parks. But climate change is making a natural threat to the fish even worse.

As atmospheric pollution warms the planet and its seas, oxygen levels are declining in the oceans, making it harder for the bottom-dwelling fish to breathe. 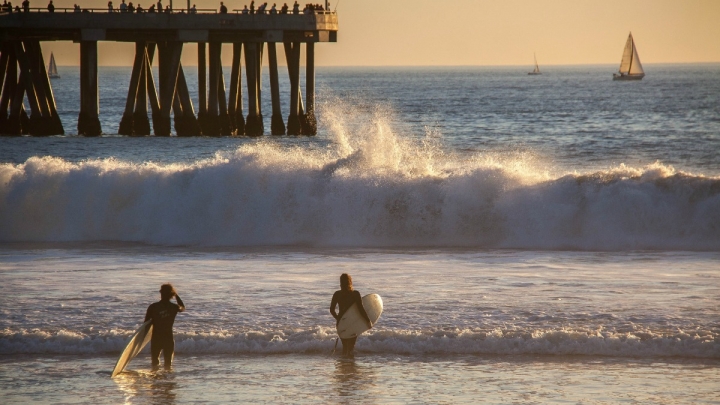 Swells roll past the Channel Islands into Venice Beach, where they break. Credit: Chris Goldberg/Flickr

Ocean warming is projected to continue reducing oxygen levels in some hotspots that are naturally low in oxygen, such as the eastern Pacific Ocean. The oxygen declines in coastal waters like California’s threaten to create invisible chemical barriers, boxing vulnerable wildlife into smaller territories.

“The importance of oxygen loss has been underestimated or overlooked by ocean scientists,” said Lisa Levin, a Scripps Institution of Oceanography professor who is helping to pioneer research into the problem.

Levin’s lab published a study last week revealing the heavy influence of oxygen levels on the biodiversity of worms, molluscs and other creatures that live in West Coast mud, which are eaten by rockfish and other marine predators.

As oceans warm, fish and other sea animals need more oxygen, yet the sea water they breathe holds less of it. Ocean circulation changes caused by global warming can also reduce oxygen levels below the ocean’s surface, where it’s absorbed from the atmosphere.

Oxygen levels can be highly variable, and scientists are still trying to untangle the role climate change may have played in declining West Coast oxygen levels since the 1980s, some of which coincided with local ocean cooling.

Scripps and federal government scientists calculated in 2010 that the oxygen declines could reduce cowcod habitat in protected Southern California Bight areas by 18 percent by the 2020s, if trends continued.

“Ocean warming and ocean acidification have had much more attention,” Levin said. “The people who have been studying changes in oxygen didn’t raise the issue about global declines until probably eight years ago, and haven’t focused on communicating to the media, to the public, everywhere it needs to go.”

Levin led a three-person Scripps research team that analyzed data from biological surveys of ocean mud using advanced statistical techniques. They reported last week in the journal Proceedings of the Royal Society B that oxygen levels appear to have more influence than temperature or a measure of acidity over the number of small mud-dwelling species found on West Coast coastlines.

The results were very different when the researchers examined samples from a different region. In the Arabian sea, the scientists discovered that the measure of ocean acidity was more closely tied to biodiversity levels than oxygen concentrations. 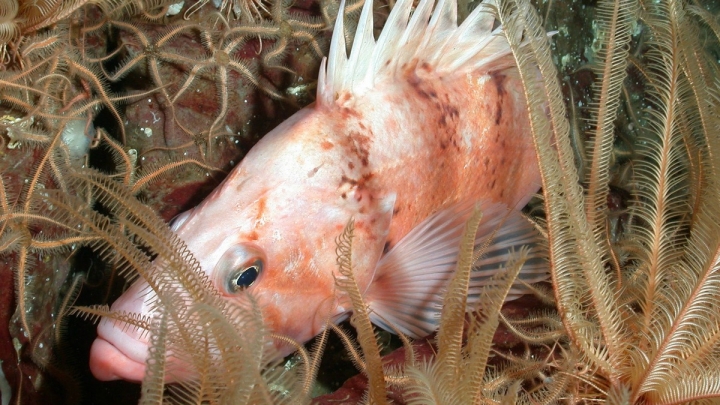 Cowcod are recovering from overfishing off the southern California coast, but oxygen declines threaten their revival. Credit: John Butler, NOAA

The finding helped to illuminate the local and regional nature of the low-oxygen threat, and the complex relationships between warming, acidification and oxygen depletion that are being caused by climate change.

“If more data were available from another area, such as the East African coast, I suspect that may be different as well,” said Nancy Rabalais, a Louisiana Universities Marine Consortium professor who was not involved with the research.

Each of the trifecta of global warming impacts tends to harm wildlife. Each of those impacts could be slowed if a United Nations climate treaty, which was negotiated in Paris in December, succeeds in sharply curbing fossil fuel use and deforestation.

Scientists point out that battered marine ecosystems would have greater chances of surviving impacts from warming if overfishing, plastic pollution and habitat destruction are also curbed. Marine parks can also help.

Extreme oxygen shortfalls already occur in seasonal dead zones, such as in the Gulf of Mexico, which is caused by farming and sewage pollution. By warming seawater, climate change can make dead zones bigger.

In areas where oxygen levels are naturally low, including off the West Coast and in the eastern Atlantic and southern Indian oceans, recent modeling showed climate change is already worsening the problem – which can fuel severe oxygen shortfalls that scientists call hypoxia.

Those impacts were projected by computer models to spread to additional regions during future years and decades. Some high-oxygen parts of oceans, by contrast, might not experience any impacts from the declines this century, the research showed.

“It’s hard to attribute a single year of hypoxia to warming,” said Curtis Deutsch, a professor at the University of Washington who contributed to the modeling analysis, which was published this year in the journal Global Biogeochemical Cycles. “And yet, at the same time, we expect it to become more frequent.” 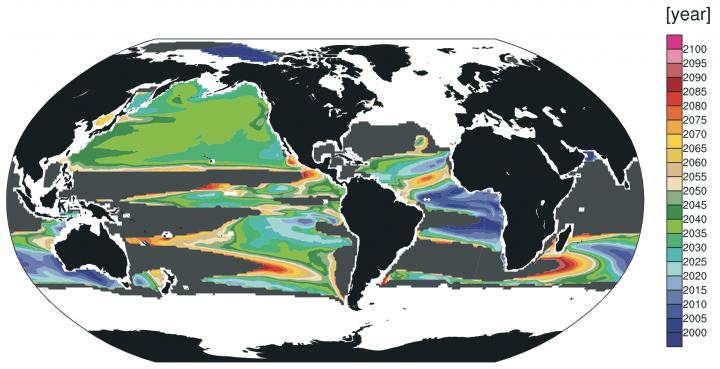 Scientists like Deutsch are turning to models to try to understand how climate change may be influencing oxygen levels in oceans. Those concentrations are influenced by a confounding array of natural and human factors, and they haven’t been well measured.

“There are parts of the ocean where models predict that we can be detecting real, long-term changes in the ocean that are distinct from natural fluctuations right now,” Deutsch said. “For fisheries, it hasn’t been detected in data, but all of the indicators point toward this being an important concern for the future.”

The modeling study honed in on oxygen impacts in the open ocean, but it didn’t reveal or project more complicated changes in coastal regions, such as in the colorful coral and sponge habitats of the Southern California Bight.

The findings from the modeling runs corroborated those from similar studies that have been published in recent years.

“These are very expected results,” said John Dunne, a National Oceanic and Atmospheric Administration biogeochemist and climate modeler who has researched the topic.

Dunne said impacts from projected oxygen declines will matter most in parts of the ocean where levels are naturally low to begin with, such as along the West Coast, including the waters off Los Angeles.

Changes in southern California may already be squeezing decimated populations of fish that are popular with fishermen and diners, such as cowcod and other rockfish, into dangerously small territories, further threatening their survival.