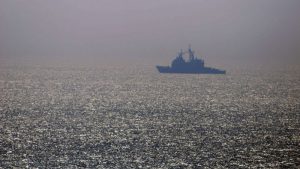 A US warship cruises through the Gulf of Oman. Photo: US Navy

Since the early 1960s, scientists have known about the so-called “dead zone” in the Gulf of Oman, a patch of water practically devoid of all oxygen. As anyone who has ever owned an aquarium knows, even fish require oxygen, but as a surprising new survey shows, the Arabian Sea features an oxygen-starved aquarium the size of Florida—and it’s still growing.

Dead zones, or oxygen minimum zones as they’re more formally known, are natural ocean features located at depths between 650 to 2,600 feet (200 and 800 meters). Significantly sized OMZs are known in about three or four key places in the world, and they’re caused by sensitive imbalances between the available oxygen supply in the atmosphere and the decay of organic matter.

Scientists have only had a hazy conception of the dead zone located in the Gulf of Oman, a strip of ocean sandwiched between India, Iran and Oman, and an important gateway into the Persian Gulf. New research published today in Geophysical Research Letters has uncovered a “dramatic increase” in the size of the Gulf of Oman’s OMZ, an observation that heralds bad news for the region’s aquatic life—and possibly our atmosphere in general.

Scientific surveys of the OMZ in the Gulf of Oman were conducted in the 1960s, and then again in the 1990s. These efforts mapped the OMZ and found that it was practically anoxic (meaning no oxygen) in the center offshore region between Oman and India, and featuring low oxygen levels, or suboxic waters, around the peripheries. Owing to piracy and ongoing geopolitical tensions, scientists haven’t analyzed the OMZ since then, which is problematic given all the climactic changes our planet has experienced over the past several decades.

Now that things have (somewhat) settled in the region, and owing to advances in robotic technologies, a research team led by Bastien Queste from the University of East Anglia’s School of Environmental Sciences, with help of Oman’s Sultan Qaboos University, has completed an updated survey of the OMZ—and the results were not good.

“As part of this project, we went to the Gulf of Oman, which shares its water masses with the wider Arabian Sea, and found that the oxygen was much lower than we thought from the outdated data,” Queste told Gizmodo. “The region is now anoxic—essentially extending the Arabian Sea OMZ into the marginal regions, much closer to where people live, fish, and depend on the marine environment. Hence the growing concerns.”

Using underwater robotic subs called Seagliders, and computer models to simulate how the water is mixed around, the researchers say the whole Gulf of Oman is now either in a suboxic or anoxic state. That’s an area around 63,700 square miles in size, which is about the size of Florida. But the researchers suspect it’s even larger, and that it’s still growing.

“There are a number of things that could have contributed to the shift—the most major of which is very much tied to climate change,” said Queste. “The oxygen levels are determined by the balance of oxygen supply from the atmosphere, mixed in by waves, eddies, and just general energetic mixing near the surface, and oxygen loss, primarily the oxygen being ‘breathed’ by bacteria living on and eating sinking decomposing organic matter.”

Queste says the increased warming via climate change means bacteria are able to breathe more, but it also means the surface layer is warmer, which creates a stronger barrier between the warm surface water and the deeper cold water (a density barrier) which reduces the amount of oxygen being injected into the ocean.

“Climate change will also change wind patterns which will change surface energetic mixing,” he said. “Increase in land use, larger cities, and increased pollution will also lead to more nutrients, such as nitrogen and phosphorus, entering the water, which promotes more algae that later sink and get consumed by the bacteria,” adding that “It’s an incredibly intricate system with many moving parts!”

The next step for Queste’s team is to conduct a deeper dive, so to speak, to better determine the causes of the growing OMZ. The water mixing explains part of the picture, mostly from season to season, but it doesn’t sufficiently explain the big shift from 50 years ago. Queste says it would also be valuable to know if the overall supply of oxygen is decreasing, or if it’s the consumption of oxygen that’s increasing.

“Another interesting question is now that the Gulf of Oman is clearly consuming oxygen faster than it is replenished, how much of that is exported to the Arabian Sea and making the wider Arabian Sea OMZ extend and grow even more?,” he asked.