The June 2013 forecast of the size of the hypoxic zone in the northern Gulf of Mexico for July 2013 is that it will cover 22,172 km2 (8,561 mi2) of the bottom of the continental shelf off Louisiana and Texas. The area, if it reaches the predicted size, will be at or near the largest size since routine monitoring of the ‘Dead Zone’ off Louisiana and Texas began in 1985. The predicted hypoxic area for 2013 is about the area of New Jersey.

Each year a hypoxic water mass with oxygen concentrations < 2 mg l-1 forms in bottom waters of the northern Gulf of Mexico continental shelf. The low oxygen conditions threaten living resources including humans that depend on fish, shrimp and crabs. Nutrients from the Mississippi River watershed, particularly nitrogen and phosphorus, fertilize the surface waters to create excessive amounts of algal biomass, whose decomposition in the bottom layer leads to oxygen distress and even organism death in the Gulf’s richest waters.

The area in summer 2012 was 7,480 km2 (2,889 mi2) following a drought in the Mississippi River watershed and stormy conditions during the monitoring cruise. Hypoxic conditions are dependent on river discharge because of the influence that water volume and salinity have on the physical structure of the water column and on the nutrient load delivered to the coastal zone. The Mississippi River discharge in May 2013 averaged 36,700 m3 s-1, which is the 13th highest from 1968 to 2013. This is above average, but not particularly high.

The daily river discharge at Tarbert Landing from 1935 through 6 Jun 2013. Units are cubic feet per second. Figure modified from http://www2.mvn.usace.army.mil/eng/edhd/tar.gif.

What bumps up the predicted size for 2013 is related to the concentration of the nitrate-Nitrogen in the river water. The concentration of nitrite+nitrate at Baton Rouge was relatively low in the drought year of 2012, and into January and February of 2013, which was near the lowest values measured since 1997. The concentration rose, however, at the beginning of May (average for the month: 128 µ mol l-1, 1.8 mg NO2+3 N l-1), and increased the total load for May to 22% above the average value from 2000 to 2013.

A second estimate by University of Michigan (http://www.sitemaker.umich.edu/scavia), also based on the May nitrogen load, puts the size of the summer hypoxic zone at 18,900 km2 (7,300 mi2). The unstated hypothesis implied by these two models is that the system can be treated as a chemostat limited by nitrogen. The data from this year’s cruise will be used to quantify the relative merits of the assumptions of the two models, and to compare them with other models.

The cruise from which the 2013 map is created and the bottom area estimate calculated will take place from July 21-28. These data will be posted at http://www.gulfhypoxia.net. Information on previous summer cruises can be found there. The map from 2012 is below. 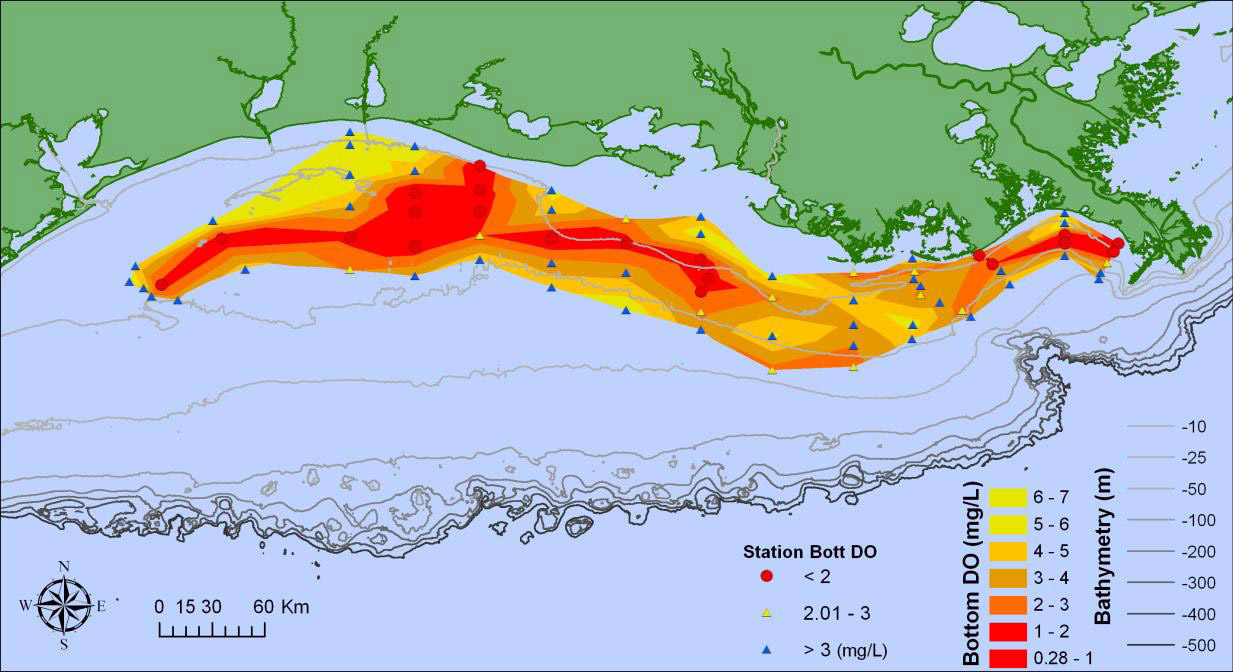 Funding for the forecast models and the Gulf of Mexico hypoxia assessment comes from the National Oceanographic and Atmospheric Administration, Center for Sponsored Coastal Ocean Research.