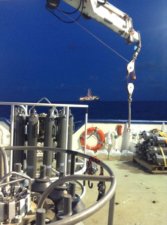 The northern Gulf of Mexico is an especially dynamic region for organic matter cycling, which is of primary importance to marine ecosystems and the global carbon cycle. An influx of carbon occurred during the Deepwater Horizon incident, and up to 25% of the released oil remains unaccounted for. A lack of Gulf of Mexico baseline data prevented a clear understanding of how the oil would be incorporated into marine foods webs, sediments, and detrital carbon reservoirs. “The main approach we used in our study to address this need was radiocarbon dating,” explained study authors Brett Walker and Brad Rosenheim. “Because terrestrial, marine, and petroleum carbon sources have very different carbon isotopic signatures, we can use these signatures to trace the sources and cycling of dissolved organic carbon in the Gulf of Mexico.”

Using water samples from the Mississippi River mouth, Mississippi River plume, the shelf/slope near the Macondo wellhead, the offshore Loop Current, and a nearshore mesoscale Loop Current eddy, the team photooxidized the samples into carbon dioxide gas using a powerful UV lamp. They then isolated the carbon dioxide gas, converted it to graphite, and counted the number of radiocarbon (14C) atoms using an Accelerator Mass Spectrometer, which ionizes carbon atoms and separates them by mass (12C, 13C, and 14C). The team used these isotope ratios to determine the radiocarbon age of the dissolved organic molecules.

A significant portion of Deepwater Horizon methane and oil was biodegraded by deep-ocean bacteria within several months after the spill. This process released dissolved organic carbon containing the same carbon isotopic signature of the oil and methane – a signature that the authors described as “petrocarbon” because of its source and because its depleted radiocarbon measurements make it appear very old.

“Chemically-speaking, it is likely no longer oil and gas in the water column, but rather dissolved organic carbon molecules that are now isotopically ‘labeled’ with this fossil oil and methane carbon,” explained Walker and Rosenheim. “We used this old 14C signal to come up with a first-order estimate of how much of the oil was transformed into dissolved organic carbon in the deep Gulf of Mexico. Turns out, it’s conservatively about 10-16% of the oil spill budget.”

This is the first study to measure the radiocarbon age of dissolved organic carbon in the Mississippi River and deep Gulf of Mexico basin. This study also sheds light on the long-term impact of the Deepwater Horizon oil spill with native bacteria converting this petroleum carbon into a stable population of dissolved organic molecules, which could be locked away from the surface ocean for centuries.

“In a way, this work suggests a biological mechanism which could possibly minimize the impact of deep well blowouts on the environment. For instance, if the 14C-labeled molecules resemble “natural” dissolved organic carbon, and not oil- and gas-derived compounds, but not yet metabolized all the way to CO2 this would represent a stable sink of oil-derived carbon in the deep Gulf of Mexico.  Future molecular analyses of these samples will help us determine that.”

This research was made possible in part by a grant from the Gulf of Mexico Research Initiative (GoMRI) to the Coastal Waters Consortium II (CWC II) and the Consortium for Advanced Research on Transport of Hydrocarbon in the Environment II (CARTHE II). Other funding sources include an American Chemical Society Petroleum Research Fund New Directions Grant and a UCI Keck Carbon Cycle AMS Laboratory Postdoctoral Scholarship.

The Gulf of Mexico Research Initiative (GoMRI) is a 10-year independent research program established to study the effect, and the potential associated impact, of hydrocarbon releases on the environment and public health, as well as to develop improved spill mitigation, oil detection, characterization and remediation technologies. An independent and academic 20-member Research Board makes the funding and research direction decisions to ensure the intellectual quality, effectiveness and academic independence of the GoMRI research. All research data, findings and publications will be made publicly available. The program was established through a $500 million financial commitment from BP. For more information, visit http://gulfresearchinitiative.org/.