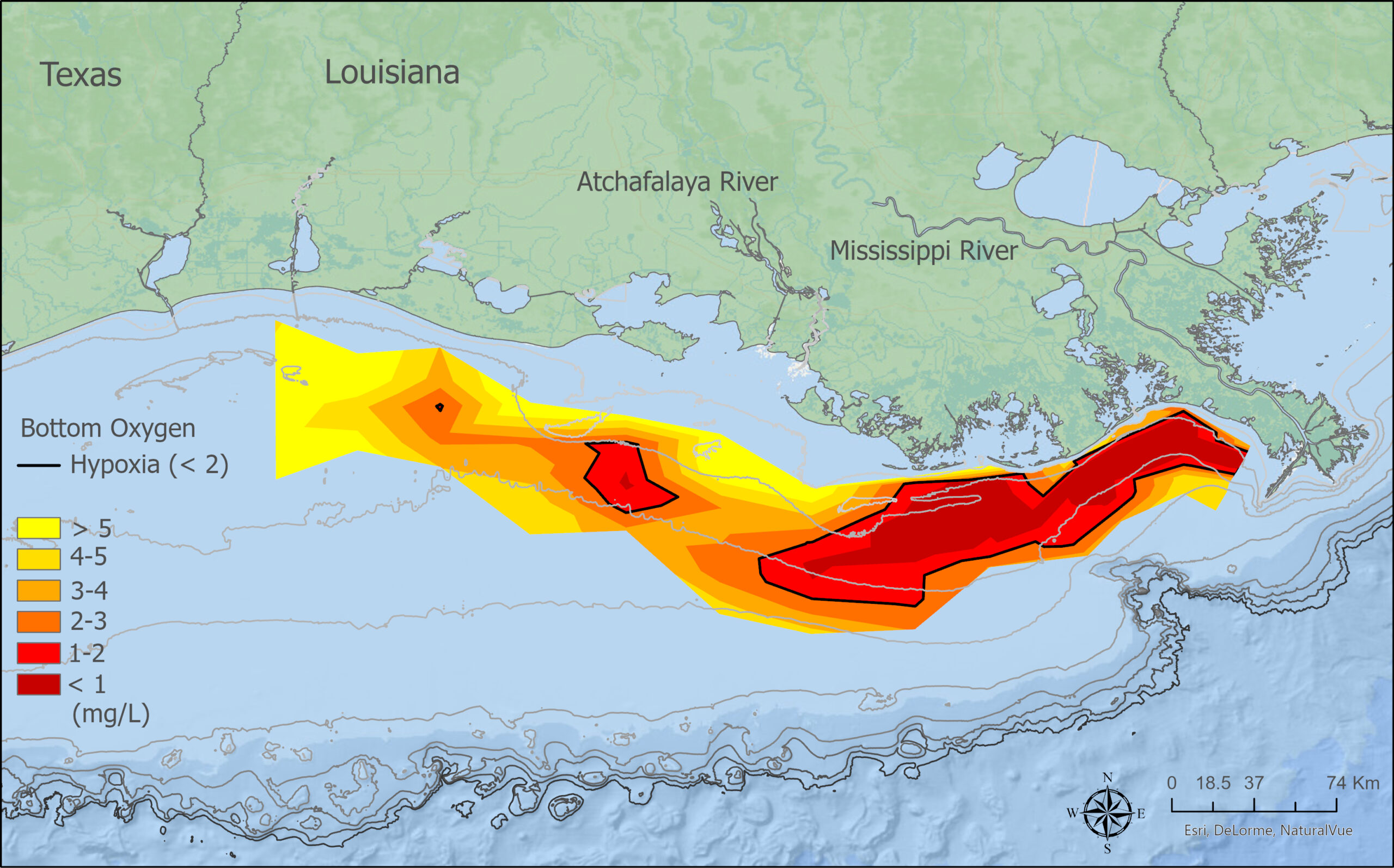 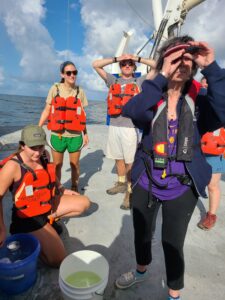 Dr. Nancy Rabalais checks the surface salinity with a refractometer before sampling water in the Mississippi River mouth. LSU students Abby Roche, Jill Tupitza, and Ben Farmer stand by for the go-ahead to collect their samples.

Stay tuned for a lighthearted log on how our crew is experiencing this exciting Expedition to document the Gulf of Mexico hypoxic zone.

The 2022 Hypoxia Cruise got off to a smooth start Sunday! The LSU crew carpooled to Cocodrie, everyone grabbed Subway, and the group loaded up the R/V Pelican for voyage. LSU is joining LUMCON and EPA folks to form the scientific crew. While receiving the boat safety briefing from Captain Tad, crew members were treated to stories of stormy seas and dangerous run-ins with bunk beds by Dr. Nancy Rabalais. The cruise officially set sail at midnight, though many of us had retired to our sleeping quarters by then. As this was many participants' first cruise and first time on a large vessel at sea, copious dramamine was consumed. There were multiple reports of graduate students sleeping better than they have in months! The rocking of the boat - if it doesn't lead to nausea - turns out to be quite the sleep aid! 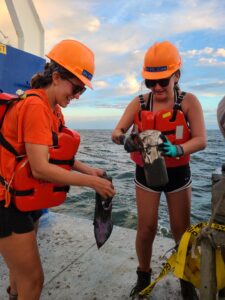 Jill (left) and Abby (right) bag up one of Abby's sediment cores. It is a fun, muddy task.

Today, the crew found dolphins right off the bat! The first site was due 75 miles east of Codorie as the crow flies, within the grandiose bird foot of the Mississippi River. As the Pelican navigated up the river, the first pod of dolphins announced their presence with a few air spouts and playful frolicking in the waves. The carefree porpoises were again spotted on our way out back out to open ocean, this time catching a free ride in the bow's wake of a massive barge.

Back in open ocean, our co-chief scientists Dr. Nancy Rabalais and Dr. Cassie Glaspie work with the boat captains to navigate us along transects. These transects are how we track down the infamous hypoxic layer of water along the bottom of the ocean, and ultimately create a map of this years' hypoxia zone. Lab managers Jill and Gina lead the day and night shifts, respectively - day shift is 3 AM to 3 PM, and night shift is 3 PM to 3 AM! The hours might be long, but the crew has acclimated well and the air is humming with scientific progress. At all hours, the boat is moving to new sites, the crew is collecting samples using fancy oceanographic equipment, and the water samples are being analyazed and frozen for later use in the Wet Lab.

Come lunch time on Monday's day shift, Abby reported "shockingly good" food. So say we all; Lawrence is an amazing cook! The delicious offerings provided much-needed fuel as the science team learned the ropes on the CTD (collects conductivity, temperature, and depth data), and YSI instruments (collects dissolved oxygen and many other fun data). Both instruments were cast out to sea, where the boat crew lowered them down and then back up with giant mechanical winches. None of this science would be possible without the fantastic tech and boat crews!

We were all treated to fantastic weather to kick off the trip, with calm seas and nary a raindrop the first day. Back downstairs in the mess, Indiana Jones movies played back to back all evening, a welcome accompaniment to our seafaring adventure. Near the end of the day shift, the two Ben's on board came to an agreement - yours truly would be deemed Young Benjamin, and the elder Ben would be Sir Benjamin Earle, taking after his stately middle name! Sir Benjamin Earle is a technician, and flew in from Hawaii the day before setting sail on a last-minute call. We thank him for his services on the vessel!

To close out the evening, the Glaspie lab found their zen on the top deck as a few storm fronts rolled in on the horizon. This exquisite view is something everyone has been looking forward to, and the first sunset was icing on the cake.

Overnight, the trusty R/V Pelican was navigated toward Barataria Bay, where Nancy and co knocked out an array of sites. At the A transect, the Glaspie lab woke up to complete a sampling of the softbottom benthic community for Abby's LSU Discover undergraduate research project. This is a competitive and well-deserved award, go Abby! Mud was slung every which way, as tends to happen with a box core sampler, and the lab secured some great samples which were preserved in formaldehyde. 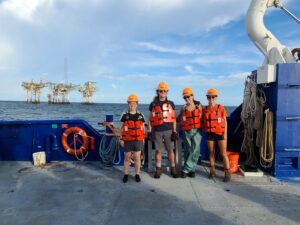 An oil platform serves as the backdrop for this photo opp of our student crew members on the "day shift". From left to right: Maya, "Young" Benjamin, Abby, and Jill.

This was Sir Benjamin's accurate summary of life on the Pelican, and a funny way to kick off the third day of the trip. On Tuesday, with the day/night crews getting in the swing of things, science continued along swimmingly. The positive spirit for exploration remains high! Not only that, but Tuesday marked Calista's birthday! Calista works for the EPA and has been collecting surface sediments and water near river mouths - this includes the Mississippi and the Atchafalaya. While Calista normally celebrates with her nephew who nearly shares the same birthday, this time she partied with the science crew!

Back up on the bow, one of our intrepid scientists (AKA Jill) spotted perhaps the biggest green sea turtle in the Gulf of Mexico! Word on the sea is the boundless reptile spanned upwards of 5 feet! We all kept our eyes peeled for more megafauna. Young Benjamin was particularly keen on communing with the largest fish in the sea, the lovely and inimitable whale shark. No luck yet, but hopes are high.

To close out the day, Lawrence served up a crowd-favorite Taco Tuesday and Abby pointed out the Pixar clouds. The kind with a flat bottom and puffy top, they served to lull the day shift to sleep as the night crew readied themselves for another round of sampling.

Stay tuned for a mid-week update!