Just How Anomalous Is the Vast Baltic Sea Dead Zone? 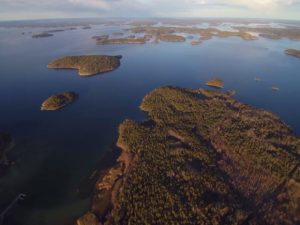 An aerial view of the Archipelago Sea, a coastal region of the Baltic. Beneath these seemingly pristine waters lies a coastal ecosystem in crisis due to low oxygen levels. Credit: Kari Mattila, Archipelago Research Institute

Newly drilled cores from the Baltic Sea reveal 1,500 years of deoxygenation history. The record sheds light on the dire state of the Baltic Sea today.

Around the world, excess nutrients in coastal waters can lead to feeding frenzies for marine algae. Once the algae die and decompose, the water that’s left behind may have little to no oxygen to support life.

These oxygen-starved waters are called dead zones. Fish and other marine life must flee them or reduce their habitats to avoid suffocating. In some cases, the unlucky faunas suffer mass die-offs.

“The oxygen deficiency in the last century is unprecedentedly strong.”Hot spots of dead zones around the world include the Gulf of Mexico, the Chesapeake Bay, and the Baltic Sea. The latter, a semienclosed body of water that lies between the Scandinavian Peninsula and continental Europe, has been called one of the largest dead zones in the world.

A study published earlier this month in the journal Biogeosciences describes a detailed 1,500-year history of low-oxygen conditions in the northern Baltic Sea. The scientists pieced together this history using data from two finely layered sediment cores taken near the coast of Finland.

The cores show a clear signal: “The oxygen deficiency in the last century is unprecedentedly strong,” said coauthor Joonas Virtasalo from the Geological Survey of Finland.

A History of Dead Zones

The Baltic Sea is no stranger to dead zones. Low-oxygen conditions, often referred to as hypoxia, have cropped up throughout its history, even before humans came onto the scene. The dead zones are due largely to the Baltic’s limited circulation and strong layering of water, which stop oxygen from replenishing bottom waters.

Since the 1950s, nutrient pollution from fertilizer and sewage has caused hypoxia in the Baltic to surge. These nutrients fuel algae blooms that coat beaches in unappealing green slime and block out light for ocean plants. Dead zones often wipe out bottom-dwelling organisms, and the effect reverberates up the food chain: Fish miss out on 106,000 metric tons of carbon in fish food each year due to fewer bottom-dwelling critters, according to one study. Baltic cod, a commercially important species for the region, are more likely to be caught with empty stomachs near hypoxic zones.

Scientists have studied dead zones in the Baltic before, but they’ve focused largely on deep-sea locations rather than on coastal areas. Yet the two regions are not the same: Coastal waters typically experience dead zones during the summer months, whereas dead zones in deeper waters can last all year long. The coast can also act like a “filter” for nutrients coming from land: It is the first stop for nutrients traveling from farm fields and cities into the sea, and scientists don’t know whether the coast can retain or chemically alter those nutrients before they reach the deeper sea.

Thus, examining past hypoxia in coastal areas and comparing those conditions with deep-sea hypoxia could help scientists better predict future expansion of dead zones for the rest of the Baltic Sea.

Secrets in the Sediment

To reconstruct past coastal conditions, the researchers started drilling. They collected two 4-meter-long sediment cores from the Archipelago Sea, a subregion of the Baltic near Finland. Because historical hypoxia can’t be measured directly but instead is inferred by proxies, the study used a suite of chemical tests.

When researchers find high concentrations of molybdenum in layers of mud, they can tell that the waters that once bathed the mud had oxygen levels close to nil.“Our study combined more proxies than usual in order to address all the mechanisms behind this complex phenomenon,” said Virtasalo.

Molybdenum ions were among the dozen proxies examined. In normal seawater, these ions tend to stay unreactive. But in situations with little to no oxygen, molybdenum ions adhere to bottom sediments and become part of the sediment record. So when researchers find high concentrations of molybdenum in layers of mud, they can tell that the waters that once bathed the mud had oxygen levels close to nil.

Another handy proxy was the clarity of the sediment layering itself. In times of ample oxygen, bottom-dwelling life thrives. These critters burrow into the seafloor and muck up the fine lineation of sediments. But in times of oxygen stress, the behavior of bottom dwellers “becomes simpler,” and the sediment layering is left more intact, said Virtasalo. This proxy gives researchers an idea of when hypoxic conditions drove bottom-dwelling life away.

The study found evidence of hypoxia during two different time periods in the record. The first was during the Medieval Climate Anomaly between 900 and 1350 CE. Temperatures in Europe during the Middle Ages were unusually warm, and past research on deep Baltic Sea sediments has suggested that hypoxia was rampant.

The study found evidence of coastal hypoxia, but unlike open-water records where hypoxia was “very pronounced,” the coastal signal was “more muted,” said Tom Jilbert, coauthor and assistant professor in the Department of Environmental Sciences at Finland’s University of Helsinki. Sediments showed reduced levels of disruption, suggesting that waters at the seafloor had low oxygen but were not completely depleted.

Jilbert said that this is a “noteworthy insight” of the study because even though the climate was warmer, conditions were not sufficient to cause extreme hypoxia on the coast.

The second period of hypoxia in their sediment record began a little over a century ago and continues seasonally through today. The study found that molybdenum levels in sediments slowly increased over the past century to reach the highest values tested, suggesting that waters at the seafloor are becoming increasingly hypoxic. The sediment layering was also wholly intact, meaning that for the first time in the record, the long-term residents of the seafloor, such as the crustacean Saduria entomon and the amphipods Monoporeia affinis and Pontoporeia femorata, were gone.

“The seafloor is completely devoid of macrofauna for the first time in our studied record,” said Virtasalo. The statement is not just a reflection of what the researchers found in the core—field observations and monitoring at the study site also confirmed their findings. The authors note that nearby subbasins of the Archipelago still have enough oxygen to support life due to topographic differences. But they caution that the rise in hypoxia found in their sediment cores merely represents what is happening in coastal waters across the Archipelago Sea: Bottom waters are losing oxygen.

Unlike Medieval Climate Anomaly dead zones, the study finds that modern-day hypoxia is driven by two main stressors: increased temperatures due to climate change and nutrient inputs from humans. “Only the higher temperatures combined with the excess nutrient levels were sufficient to cause the [seafloor] habitat loss of the last century,” said Virtasalo. Together, these factors have made for levels of coastal hypoxia that are unparalleled in the sediment record.

A video summary of the research is given below:

Despite the rise of hypoxia found in the study, Jilbert thinks that there’s still time to stop the spread of dead zones. “It is definitively not too late,” he said. “In fact, there have been substantial intergovernmental efforts already to reduce nutrient loading to the Baltic Sea.”

“The required reduction in nutrient input might be higher than previously thought.”He points to a modern-day success story: Waters around Stockholm, Sweden, had long suffered from human-caused dead zones but now show signs of rebounding after the city curtailed its nutrient pollution.

But the lead author of the study, Ph.D. candidate Sami Jokinen at the University of Turku, noted in a press release that future success may hinge on imposing even stricter measures: “To achieve good ecological status in coastal areas under the projected global warming, the required reduction in nutrient input might be higher than previously thought.”