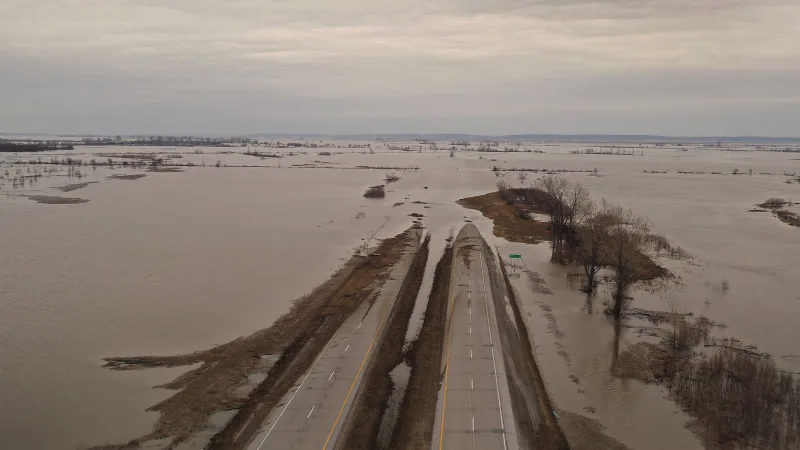 The byzantine networks of rivers and streams that drain the Midwest is facing a flooding crisis of historic proportions. The multibillion disaster centered in Nebraska will spread this spring, with above average rainfall expected to cause floods to impact some 200 million Americans living near rivers. And it won’t necessarily end once it reaches the Gulf of Mexico.

This spring’s floods will shape this summer’s dead zone. The area of low oxygen is an annual occurrence driven in large part by nutrient-laden runoff that washes down the Mississippi River and its many tributaries, fueling algae blooms when it reaches the Gulf. The dead zone in 2017 was the largest that’s ever been recorded at nearly 9,000 square miles, and while it’s much too early to say exactly how big this summer’s dead zone will be, the flooding we’ve seen so far doesn’t bode well. Another enormous dead zone would put pressure on Gulf marine life and fisheries.

“The flooding we see this month, in March, may ultimately determine the size of the Gulf of Mexico dead zone in August,” Kimberly Van Meter, a researcher who studies water and ecosystems at the University of Illinois at Chicago, told Earther.

And this year’s floods are already shaping up to record setting. According to the National Oceanic and Atmospheric Administration (NOAA), the upper Mississippi and Red River of the North basins have doubled their normal spring rainfall totals. That includes areas that were smacked by a rare bomb cyclone earlier this month that dumped rain on snow and set the flooding overtaking the region in motion. NOAA forecasts indicate areas all along the Mississippi River basin could face major flooding through May as snow continues to melt amid a forecast for heavier than normal rainfall over the next few months.

As the floodwater wash over farmer’s fields, they’ll do more than strip soil. They can also scoop up fertilizer and other organic matter and transport it downriver. The nutrient-rich water will reach the Gulf of Mexico sometime in June, which will kickstart the dead zone.

“In the simplest terms, the more nitrate that is transported downstream to the Gulf, the larger the size of the dead zone,” Van Meter said. “Nitrate is food for algae, and spring floods essentially deliver a large, delicious meal to the Gulf just as temperatures start to rise and the algae start to grow. Decades of fertilizer application and intensive livestock production across the Mississippi River Basin have created large stores of nitrate in the landscape, just waiting for the next flood to carry them to the Gulf.”

As that algae bloom grows, it hoovers up all the oxygen that marine life needs to survive. The process is known as hypoxia, and chokes marine life to death. But they also take a toll on humans as well. Separate algae blooms in Lake Erie have befouled drinking water. Those along Florida’s coasts have harmed the tourism industry. The Gulf of Mexico dead zone creates its own hardships.

“We’ve got data that it’s essentially a doughnut hole that forms with brown shrimp where they are avoiding areas that are low oxygen and they’re congregating on the edge,” David Kidwell, a researcher at NOAA’s National Centers for Coastal Ocean Science, told Earther.

Recent NOAA-funded research has shown that the dead zone can cause small and large shrimp prices to fluctuate, with fishermen catching fewer high-value large shrimp when a dead zone is present. Climate change is liable to make blooms worse by intensifying the hydrological cycle and warming waters. Whether the historic flooding that just hit the Midwest leads to a historic dead zone is not set in stone, though.

Kidwell said that the annual dead zone forecast NOAA and the U.S. Geological Service puts out in early summer is based in large part on “discharge of the Mississippi River as well as the pure nutrient levels in the river at that time,” but other factors could dull their impact. A hurricane—which would offer its own set of problems—could churn up the Gulf and staunch the algae bloom.

Regardless of what happens this season, it’s clear that something has to change in how we manage land and floodwaters. Nancy Rabalais, a marine ecologist at the Louisiana Universities Marine Consortium, told Earther that it “does not make sense is to rebuild in floodplains” if the end goal is to limit the Gulf dead zone (to say nothing of exposing communities upstream to floodwaters). Reducing the amount of farmland in the floodplain so would ultimately cut down on fertilizer and animal waste being swept into streams and eventually the Gulf. Rabalais said, though, that she knew “what this means economically to the agriculture community” if floodplains were put off limits.

That neatly illustrates the tradeoffs and hard discussions society will be forced to have—farmers or fishermen? Midwest or Gulf Coast?—the longer we put off addressing climate change, which is set to make heavy downpours and flooding even worse. Starting those conversations now makes a lot more sense than, say, holding sham votes.