How are chickens and pigs altering the Gulf of Mexico? Sustainability group asks Tyson CEO to help protect Gulf

Shrimpers and environmentalists gathered on the banks of the Mississippi River here Thursday to call on livestock farmers to help protect the Gulf of Mexico. 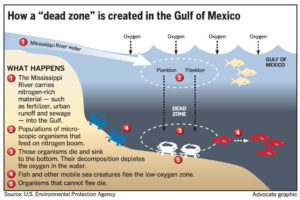 Sustainability group Mighty Earth sent an open letter to the CEO of Tyson Foods, urging him to take steps to prevent agricultural runoff from washing into waterways that eventually drain into the Gulf of Mexico, contributing to the “dead zone” where marine species cannot survive.

The company has said Mighty Earth has made misleading claims about Tyson and in a statement wrote that they’ve made significant progress working with farmers to feed livestock more efficiently.

The Gulf dead zone appears every summer after spring rains wash agricultural waste from the middle third of the country into the bodies of water that eventually drains into the Mississippi.

Algae feast on the nitrogen and phosphorous found in fertilizer and animal waste, sucking all the oxygen out of the water, a phenomenon known as hypoxia. The hypoxic water is unable to support fish, shrimp and other marine life, and its area has grown in size in recent years.

About a dozen people participated in the rally on the river, held not far from the Audubon Aquarium, as they sought to bring attention to the pollution problem.

It’s important for the public to understand how much of an impact the upstream meat industry is having on the downstream fishing industry, especially in the already fragile Gulf of Mexico, said Gulf Restoration Network fisheries associate Kendall Dix.

“The dead zone is taking its toll on us,” said Thomas Olander, chairman of the Louisiana Shrimp Association.

“If we don’t get some kind of clean-up here soon, we’re not going to have a future. … We must have this pollution stop immediately.”

Mighty Earth has targeted Tyson because the company is the nation’s largest meat producer, said campaign organizer Audrey Beedle. In addition to the Tyson brand, they own Jimmy Dean, Hillshire Farm, Sara Lee and Ball Park, among others.

With such a large share of the market, Beedle said, Tyson could make a huge impact if it follows through on its promise to market more sustainable foods.

Tyson has contended that environmentalists critical of the company are operating under faulty assumptions.

“We share this group’s concern about the environment but disagree with its misleading characterization of our company,” the company wrote in a statement in August after Mighty Earth issued a report on their business.

The statement continued, “Tyson Foods is not in the business of raising the crops and we own very few livestock farms. Instead, we depend on thousands of independent farmers to raise our chickens or sell us their cattle or hogs.”

Mighty Earth is currently holding events around the country to present the open letter based on its study and to collect signatures on their petition calling for Tyson to promote more sustainable practices. As of Thursday’s event in New Orleans,  60,000 people had signed the petition, Beedle said.

Tyson says it is is working with farmers, academics, regulators and environmentalists to continue improving on grain production.

“We’re committed to doing our part to address concerns about pollution from crops, but believe any real progress must involve a broad coalition of interests, not just a single company,” wrote spokeswoman Caroline Ahn.