Downpours in June drove nutrients into the Mississippi River that ultimately deprived a much larger portion of the Gulf of oxygen than had been expected. 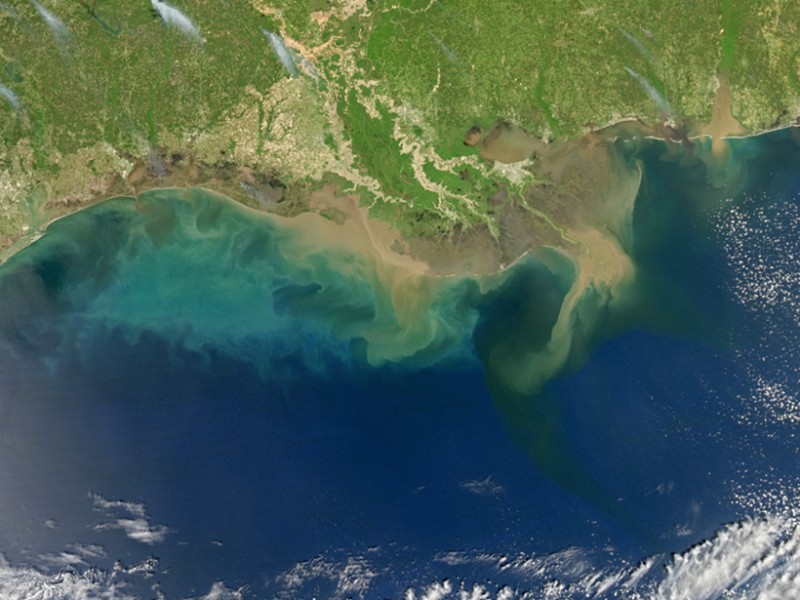 Heavy June rains contributed to the larger-than-average size, said Nancy Rabalais, executive director of the Louisiana Universities Marine Consortium, who leads an annual survey cruise that measures the size and severity of the dead zone.

The 2015 dead zone extends more than 2500 square kilometers beyond what scientists forecast in May. The spring estimate fell short because abundant June precipitation in the Mississippi River watershed—mainly in Ohio and northern Mississippi—flushed more nutrients than expected into the river and caused much higher than average discharges during June and July from the river into the Gulf, Rabalais said.

Dissolved oxygen levels in the bottom water of the Gulf of Mexico off the Louisiana coast, plotted with data collected by a 28 July to 3 August survey cruise by the Louisiana Universities Marine Consortium. The measurements were used to help determine the size of this year’s hypoxic (low-oxygen) zone, also known as the “dead” zone. Shades of red denote areas with oxygen concentrations of 2 milligrams per liter of water or less, the threshold below which waters are considered hypoxic. Credit: Data: Nancy Rabalais, LUMCON; R. Eugene Turner, LSU, NOAA

Every spring, nitrate and phosphorous from fertilizers in the largest farming states run off into the Mississippi River, which empties into the Gulf of Mexico. This nutrient-rich water fosters large blooms of algae, which eventually die, fall to the bottom of the sea, and decompose, leaching oxygen from the water.

In the resulting oxygen-deficient environment, most living organisms cannot survive. Many simply flee the area, but others remain and perish, creating what’s commonly known as a “dead zone.”

In general, the Gulf of Mexico dead zone ranks as the second largest in the world, surpassed only by another vast stretch of depleted water in the Baltic Sea.

The National Oceanic and Atmospheric Administration forecasts the size of the Gulf dead zone each year on the basis of the quantities of nutrients such as nitrogen and phosphorus that run off into the Mississippi River in May. This year, the U.S. Geological Survey estimated 104,000 metric tons of nitrate and 19,300 metric tons of phosphorus washed into the river during that month.

This year’s dead zone could have grown even larger than it did, especially off Texas, Rabalais said, except that westerly winds pushed low-oxygen water toward the east, shrinking the zone’s footprint.