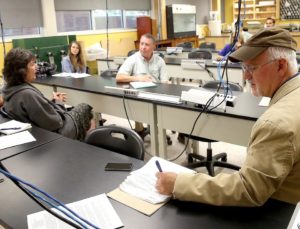 A forum focused on the issue and ramifications of low oxygen levels in bodies of water was held today at Nicholls State University.

Hypoxia, or oxygen depletion, is an environmental phenomenon where the concentration of dissolved oxygen in the water column decreases to a level that can no longer support living aquatic organisms. The Louisiana Hypoxia Working Group consists of scientists and other concerned people who come together monthly to discuss the issue and offer potential solutions.

“There are a lot of things up in Congress right now that are important to the hypoxia effort,” said group coordinator Doug Daigle. “One is the Water Resources Development Act, which is a recurring bill that comes up every few years and deals with things like ecosystem restoration on the coast and upstream, wastewater treatment plants, floodplain management and river management in general.”

The Water Resources Development Act deals with various aspects of water resources such as environmental, structural, navigational and flood protection, to name a few.

A few events have led to the northern region of the Gulf of Mexico becoming a hypoxic zone, such as freshwater discharge from the Mississippi River, the decomposition of bacteria on the ocean floor and eutrophication, which is an excess of nutrients in a body of water.

This group has been meeting since 2003 to combat hypoxia, after the first hypoxia action plan was put together.

“We’re really kind of a forum now to exchange information and find out what’s going on,” said Daigle. “We usually meet at LSU, but we’ve started branching out to other places across the state. Last year we met at UL and before that we met at Tulane.”

Daigle, who is also a research associate for LSU’s Department of Oceanography and Coastal Sciences, said holding the meeting at Nicholls gives people a chance to get involved without having to travel too far.

Members of the group are studying how water quality affects everything from shellfish to rice. Their focus is on issues relating to low oxygen levels, but the group also discusses general water quality and how it impacts various areas of human life.

“I’m working with the physiologists from the University of Miami to look at the physiological component of habitat compression,” said Rabalais. “In other words, what can a fish take, according to oxygen levels?”

The Louisiana Sea Grant is looking to work with commercial fisherman on the hypoxia issue.

Melancon took the water quality discussion to the point of acidification and its implications in bodies of water.

“Right now acidification is not an issue in Louisiana, per se, at least for the shellfish,” said Melancon. “That’s not to say that it’s not going to change once you add diversions all along and once you add the other aspects of coastal restoration. The commercial oystermen are beginning to understand in-depth how delicate the oyster physiology is to environmental change.”