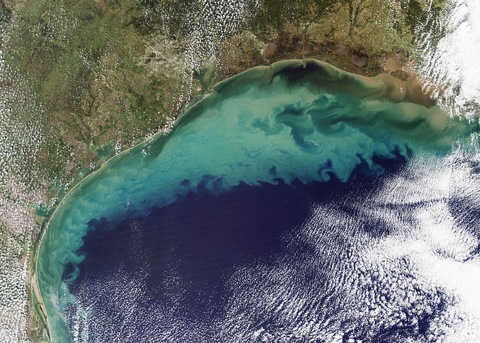 A dead zone — already the size of the state of New Jersey — is growing in the Gulf of Mexico, fueled by nutrient runoff from the swollen Mississippi River.

This year, with floodwaters from the Birds Point levee breach and the Morganza and Bonnet Carret spillways spreading over farmland and other residential areas, the river is collecting tremendous amounts of fertilizer and pesticides. This is contributing to what scientists say may become the largest dead zone ever, and posing a serious threat to already taxed marine life.

During the rainy season, fertilizer, animal waste, sewage and car exhaust wash into the Mississippi and the Atchafalaya rivers, flow south and empty into the mouth of the Gulf.

Nitrogen and phosphorous from farm runoff and animal waste are especially toxic to ocean life. They act as natural fertilizers, feeding harmful algae and causing it to bloom wildly. As bacteria consume these blooms, they suck oxygen from the water, depleting the ocean’s oxygen reserves. Scientists call this oxygen depletion hypoxia.

"We’re expecting probably the largest-ever amount of hypoxia," said Nancy Rabalais, a marine scientist and executive director of the Louisiana Universities Marine Consortium. "That’s the the prediction based on the amount of nitrogen coming down the river."

A surge of fresh water creates a layering effect in the seawater, which compounds the problem. The freshwater sits above the heavier saltwater, acting as a cap that prevents oxygen from reaching the deeper water levels.

"The bottom layer of the ocean gets so low in oxygen that sea life has to swim away and vacate the area, and if they can’t get away, they suffocate," said Matt Rota, science and water policy director for the Gulf Restoration Network.

Flooding could cause further injury to fisheries in the northern Gulf of Mexico, already reeling from last year’s oil spill, Rabalais said. Dead zones alter the habitat for crab, shrimp, fish and lobster, often forcing them to shallow areas. This includes catchable seafood, like shrimp and snapper, which are vital to the area’s fisheries.

"A lot of the Louisiana shrimp fisheries use smaller vessels," Rabalais said. "With the price of fuel and the distance they have to go, they might opt not to go offshore."

Possibly the largest source of nutrients comes from farms in Illinois, Iowa, Ohio and southwest Minnesota, where drainage tiles — plastic pipes that crisscross underground – – drain the once-wet soil, making it arable, and dry enough for corn and soybean crops. But these pipes also flush nitrogen fertilizer into tributaries, which lead to rivers and eventually the Gulf.

In fact, research shows that the most heavily tile-drained areas of North America also contribute the largest source of nitrates to the Gulf of Mexico, which add to the dead zone, according to Mark David, a professor of biogeochemistry from the University of Illinois.

David is researching options for reducing nitrate levels. They include valves and beds of woodchips inside the tiles, as well as restoring wetlands, which filter pollution naturally.

It’s not the farmers’ fault, David said, but there’s little incentive for farmers to reduce their nitrate output. "There’s a fundamental problem in the whole system if we really want to reduce nitrate and phosphorous loss from the system. Everything’s been voluntary up to this point, and that hasn’t gotten us anywhere."