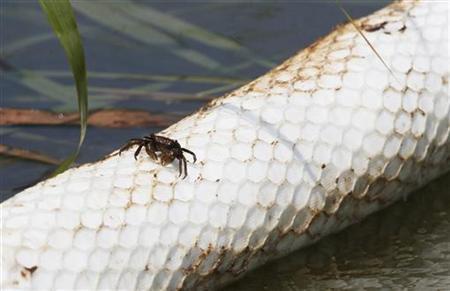 A crab, covered with oil, walks along an oil absorbent boom near roso-cane reeds at the South Pass of the Mississippi River in Plaquemines Parish, Louisiana, August 1, 2010.  Credit: Reuters/Patrick Semansky/Pool

In separate federal lawsuits filed Tuesday, the groups asked judges to force the U.S. Environmental Protection Agency to set base guidelines for state water quality standards and for wastewater treatment, both aimed at reducing pollution in the Mississippi River Basin.

The basin stretches from the Rocky Mountains in the west all the way to New York state in the east. It funnels water south through the agricultural heartland and industrial states to Louisiana and the Gulf of Mexico.

Along the way, it gathers nitrogen that stimulates excessive algae growth in the dead zone from rainfall, runoff from farms and livestock production and wastewater treatment plants.

"The Mississippi River and the entire Gulf of Mexico has long been treated as the nation’s sewer," Matt Rota, director of science and water policy for the Gulf Restoration Network told reporters at a news conference on Wednesday.

"Current efforts by the EPA and the Mississippi River states just simply are not enough," Rota said, describing the dead zone as "one of the many ongoing insults to the Gulf ecosystem."

The Gulf Restoration Network, the Natural Resources Defense Council and other groups said they filed the lawsuits after petitions to the EPA in 2007 for stronger wastewater treatment rules and in 2008 on water quality standards went unfulfilled.

The EPA, which denied the petition to set water quality standards for nutrients last year, said it was reviewing the lawsuits. It has not responded to the petition to update the wastewater treatment standards.

The EPA letter denying the petition said a comprehensive rule would not be the most effective way to address the "significant water quality problems facing our nation."

Glynnis Collins, executive director of the Illinois-based Prairie Rivers Network, said setting a target was critical. Only Minnesota and Wisconsin have adopted EPA steps to limit pollution that were recommended in 2000, she said.

Illinois is the largest source of nitrogen and phosphorous to the basin through runoff from industrial scale corn and soybean production and the massive wastewater treatment programs from the Chicago Metropolitan Water Reclamation District.

The pollution causes extensive damage well before the water reaches the Gulf, forcing some Illinois communities for example to install expensive treatment equipment or even pipe water from neighbors, Collins said.

The dead zone in the Gulf of Mexico stretches west toward Texas from the delta and is roughly the size of Massachusetts, Louisiana State University Professor Eugene Turner said.