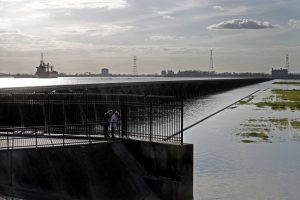 NORCO, La. (AP) — The U.S. Army Corps of Engineers began opening part of a 1930s flood control structure northwest of New Orleans on Thursday to divert water from a rising Mississippi River into nearby Lake Pontchartrain, a move that eases pressure on the city’s levees but raises environmental concerns about the lake and the Gulf of Mexico.

Rain in the upper Mississippi Valley has caused the river to rise and increase in velocity. It was projected to reach 17 feet at a key New Orleans gauge, with a speed of 1.25 million cubic feet (about 35,400 cubic meters) per second. Those forecasts triggered a decision to open the Bonnet Carre Spillway for the 12th time since it was completed in 1931. Opening the roughly mile-and-a-half long structure of concrete bays and wooden timbers diverts some of the river’s flow before it reaches New Orleans.

The huge timbers, called needles, sit vertically in each of the 350 concrete bays. On an order from Maj. Gen. Richard Kaiser, the commander of the Corps’ Mississippi Valley region, workers began using cranes to lift needles up and out of eight of the bays, releasing a rush of river water over land. The water will continue to flow into the lake nearly six miles away and then into the Gulf of Mexico.

Environmental concerns include the effects the fresh river water will have on the salinity of the brackish lake and the coastal Gulf waters. Changes in salinity can affect fisheries, causing finfish to move out of the lake, while potentially killing oysters developing off the Louisiana and Mississippi coasts.

“In 2011, the Bonnet Carre had to be opened up for quite some time,” said Lee Smithson, executive director of the Mississippi Emergency Management Agency. “That really wreaked havoc on our oyster beds.”

The river water also carries nutrients that can contribute to algae blooms, said John Lopez, a scientist with the Lake Pontchartrain Basin Foundation. He said winds can push mats of algae into harbors, where fish kills are a possibility.

“We will be looking for what species of algae might be in the lake,” Lopez said. Some varieties of algae contain neurotoxins that are harmful to humans, he said.

The extent of ay environmental effects will depend on numerous factors, including the amount of water that will be released into the spillway, and the amount of time that it flows.

Corps officials will constantly monitor river conditions to see whether the flow should be increased or decreased, and when it can be shut down. Clancy said he currently expects the spillway to remain open for about three weeks — but more rain upriver could force a longer opening.