For 10 years, Texas A&M oceanography professor and researcher Steve DiMarco has led a research cruise in the Gulf of Mexico, to study and predict hypoxic regions of water.

July defines the official size of the dead zone based on a research cruise organized by Louisiana Universities Marine Consortium, a coastal research and educational facility, DiMarco said.

“What we do in June and August is we provide the time series,” DiMarco said. “Presumably, the peak of hypoxia is July. No one really measured it in June or August in the past, so what we are funded by the

[National Oceanic Atmospheric Administration] to do is provide some context by that early measurement.”

There are three leading factors that determine hypoxic levels — the amount of nutrients present in the water, the amount of freshwater present and overall wind direction, DiMarco said.

Hypoxia is important to monitor because of the possible excessive growth of certain nutrients that cause oxygen to be depleted, which could have the potential to collapse an ecosystem, DiMarco said. 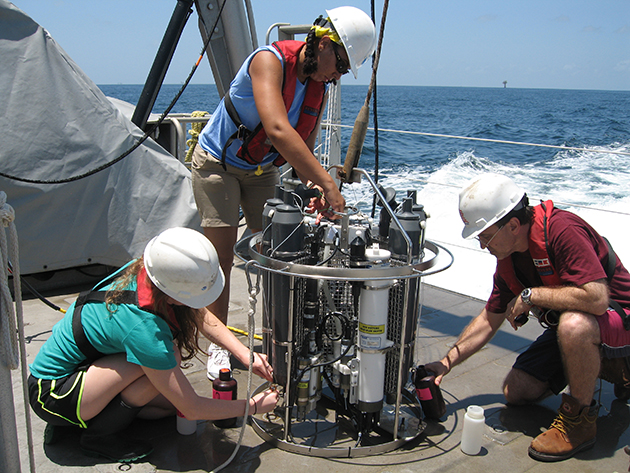 “Nitrate fertilizers along with some amount of phosphorous are leading factors in forming these ecosystems.”

DiMarco said that agricultural practices, such as farming taking place near the Mississippi River, are a leading source for the build-up of nutrients.

“The largest area of nutrient build-up we have found is near the Corn Belt around Iowa and Illinois,” DiMarco said.

According to DiMarco, greater levels of hypoxia have potential to impact the fishing industry.

“Fish, like humans, depend on oxygen for life,” DiMarco said. “And when hypoxia causes a depletion of oxygen in a certain area, this event will either kill the fish or drive them away to more oxygen rich areas, making it harder for fishermen to catch them.”

During the cruise, DiMarco and his research team were equipped with four ocean gliders, torpedo-like instruments that were sent far beneath the Gulf’s surface. Beneath the water, the gliders transmit data, four times per second, back to the ships on the surface, DiMarco said.

“These gliders contain both salt and oxygen sensors to help determine the line between fresh and salt water in the Gulf,” DiMarco said.

Over the past 10 years the research cruises have given approximately 80 students the opportunity to train on board a scientific cruise,  DiMarco said.

“Our first research cruise was in 2004 and ever since, I believe we have been making a significant impact in controlling hypoxia,” DiMarco said.

Rebecca Gray, a graduate student at Texas A&M, assisted with the latest cruise in the Gulf. Gray said she tested water samples to help determine the amount of sediments at a particular depth, which determined the line between oxygenated and hypoxic levels of water.

“As a geologist on board, I was continuously running water samples through filters for 24 hours,” Gray said. “It was constant science for five to seven days straight.”

Wenxia Zhang,  a doctoral student said she has been on the hypoxia cruise twice. Zhang said her role in the study was to collect and analyze data from the acrobat, which was towed at the back of the ship.

“This was a good experience for an oceanographer,” Zhang said, “because it combined classroom learning with real life practice.”