A new, massive dead zone found in the Indian Ocean 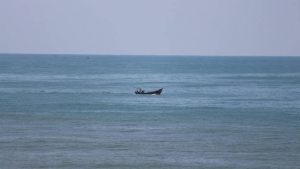 There are many ‘dead zones’ in the oceans of the world, including in the waters off the west coasts of North and South America, the west coast of India, and the Arabian Sea.  Dead zones contain no oxygen and are also associated with nitrogen depletion, which means they are void of most marine life.

A new dead zone has recently been identified in the Bay of Bengal in the Indian Ocean.  A dead zone is typically a large area of water from 50 to 100 metres below the surface, to depths of many hundreds of metres.  They can be many thousands of square kilometres in area.

But the new dead zone, studied by Dr. Bo Thamdrup, a Professor of Geomicrobiology at the University of Southern Denmark, and his colleagues, is mysterious because it contains trace amounts of oxygen. What little oxygen there is has been holding back the process of microbes depleting the water of nitrogen.

Because dead zones are linked to global warming and are increasing in both size and number, scientists want to better understand how the Bay of Bengal dead zone became so different.