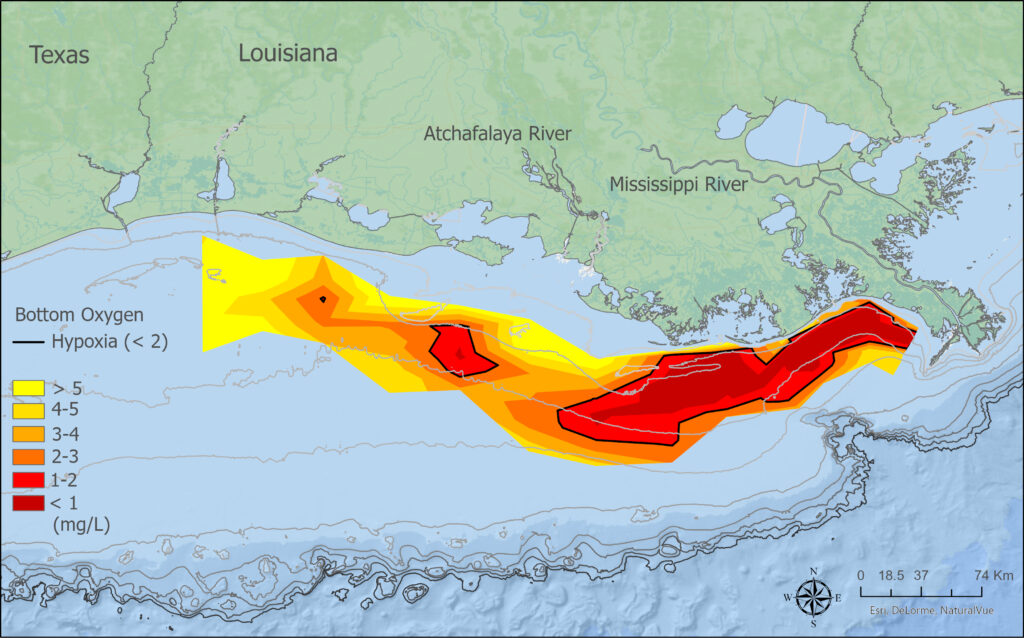 Hypoxia, or low oxygen, is an environmental phenomenon where the concentration of dissolved oxygen in the water column decreases to a level that can no longer support living aquatic organisms. Hypoxic areas, or “Dead Zones,” have increased in duration and frequency across our planet’s oceans since first being noted in the 1970s.

Gulf hypoxia in the news:

Mark Schleifstein | NOLA.com 25 June 2022 The record June heat wave in southern Louisiana, with water temperatures edging into the mid-90s on Friday in Lake Pontchartrain and along the Gulf Coast, is serving up a triple [...]

Our Views: A large ‘dead zone’ in the Gulf of Mexico needs more effective responses

STAFF EDITORIAL | THE ADVOCATE 22 June 2022 The giant dead zone in the Gulf of Mexico is one of our summer rituals, and the good news is that this year’s version is expected to be a [...]

David Pitt | AP News 10 June 2022 DES MOINES, Iowa (AP) — The federal government said Friday that it will distribute $60 million among 12 states that have waterways that flow into the Mississippi [...]

Mark Schleifstein | NOLA.com 3 June 2022 A gap in the Mississippi River's banks in the waterway's far southern reaches has widened into a full-blown channel, funneling huge amounts of water through it and prompting [...]

The low-oxygen Gulf ‘dead zone’ could be three times the size of Rhode Island; here’s why

Mark Schleifstein | NOLA.com 3 June 2021 The 2021 summertime "dead zone" along the Louisiana and Texas coast lines — an area of low to no oxygen that can kill fish and bottom-living organisms — [...]

Mark Schleifstein | NOLA.com 2 June 2022 The Gulf of Mexico's "dead zone" is again expected to be larger than the state of Connecticut this summer, NOAA said Thursday in its prediction of the low-oxygen [...]

Anne Readel | New York Times 28 March 2022 As I drove last May through Appleton, Wis., the small city offered up a series of idyllic scenes: children playing on tree-lined streets, couples walking their [...]